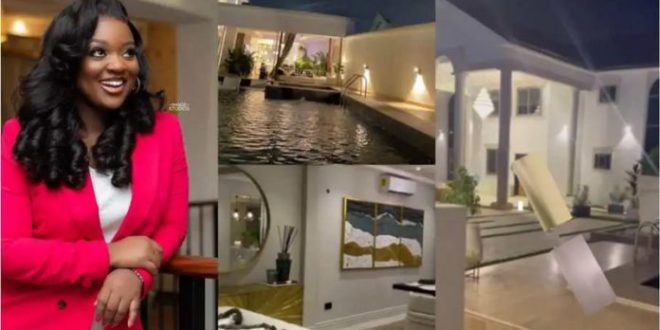 Popular Ghanaian actress, Jackie Appiah, is currently topping the trends on Twitter a few hours after a video of her plush mansion hit the internet.

The mansion is undoubtedly one of the biggest in the country and after it hit the public domain, many people have shared their thoughts about it.

Social media users have congratulated the actress for putting up such huge building.

Whereas some think it’s a great achievement, others also believe her acting role is now paying off.

However, some netizens have decided to drag dancehall artiste, Shatta Wale’s name into the conversation.

Shatta Wale at the beginning of the year heavily criticised the Ghanaian actress.

He alleged that Jackie climbed up the ladder of success immorally and could also earn enough wealth should he follow suit.

He further claimed that the actress is living under pretence and should desist from that.

Though Jackie Appiah did not respond to his attacks, some social media users are rather trolling the dancehall King.

To them, Shatta’s attacks have rather made the actress strong and proved to him that she is indeed capable of managing and owing her own affairs.

She is said to have moved into the two-storey building in December 2021.

The beautiful house also has a swimming pool. Videos of the plush mansion popped up showing the interior and compound.