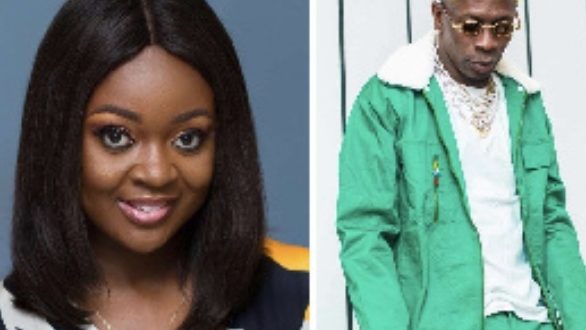 Following the viral video of dancehall act, Shatta Wale calling actress, Jackie Appiah a slut, some Ghanaians on Twitter have fired back at him for his uncouthed behavior.

Insulting a lady is one thing that most people frown on, no matter how wrong the lady was because they believe there are better ways to handle a lady who has wronged than dissing and calling her names in public.

People on Twitter failed to understand why Shatta would rain so much insults on a lady for an issue he claims happened two years ago. Since his reason for this does not make any sense, some are convinced Shatta Wale is only envious of Jackie and he is only trying to use her for hype because she is richer than him and has more followers than he does.

Another tweep was also more concerned about the stereotype that people like to attach to successful women.

“The stereotype you guys associate to women when they make it be lame asf! So if a female make money norr she dey sleep wit men ! Such feeble mentality.

Another tweep’s advice to the artiste was for him to stay in his lane of music and leave the actress to stay in her own lane of acting, as everyone has their own strategies of building their brand.

Shatta Wale seems to be on an agenda of calling out his fellow celebrities and he has left people wondering who he will drag next and how many years ago the person stepped on his toes.

Previous PHOTOS: Celebrities who dated other famous celebrities
Next Come and take your place in the Black Stars – Twum Boafo makes special appeal to Salisu