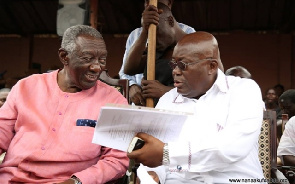 Former President John Kufuor has applauded President Nana Akufo-Addo for the practical and fair manner in which he addressed the issue of party militias in his third state of the nation address.

Mr Akufo-Addo, in the address, told parliament on Thursday, 21 February 2019 that if the two main political parties – the governing New Patriotic Party (NPP) and the main opposition National Democratic Congress (NDC) – do not voluntarily meet to fashion out ways to disband their militias, he would apply legislation to disband them himself.

“I want to make a sincere passionate appeal to the leaders of the two main political parties in our country – NPP and NDC – to come together as soon as possible, preferably next week, to agree on appropriate measures to bring an end to this worrying and unacceptable phenomenon of vigilantism in our body politic”, the president said.

Commenting about it on Class91.3FM’s Executive Breakfast Show on Friday, 22 February 2019, Mr Kufuor told host Benjamin Akakpo that: “I think he did it right”, adding: “To me, the first really important matter for statehood is security. It’s from security that you get stability and peace”.

“Unfortunately, as he recounted, for many years back, our situation hasn’t been too peaceful and stable and this strange development of vigilantism that seems to be evolving, rightly said, needs to be quenched before it became a real monster.

“And he put the blame squarely on the parties, so, he called on the parties, including his own, to meet and find a correct solution to the matter and that if they didn’t do it, then he’ll be forced to resort to executive measures and with also legislative to finish with it.

“And I believe that’s the way to do it. He wasn’t exempting himself. He said the parties, including his own party, and I felt that was very fair and I believe that was part of the reason the opposition behaved the way they behaved – calm and listening. The president sounded very practical. And I commend him again for the practical approach”, Mr Kufuor said.

Following the gun violence that marred the Ayawaso West Wuogon by-election on Thursday, 31 January 2019, the president set up a three-member Commission of Inquiry to probe the matter.

Mr Kufuor said: “I believe the Commission the president has set up should be allowed to do its work”.