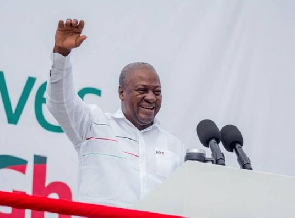 I have something to offer Ghanaians – Mahama

Erstwhile president John Dramani Mahama has stated that he has more on the table for Ghanaians and is ready to move the country forward when voted into power come 2020 elections.

John Mahama, who has described the Akufo-Addo-led government as a failure, said in a tweet that the NPP’s ‘2016 change’ anthem has not yielded any positive outcome since they took over from the NDC.

At a recent tour at Abiriw Akuapem in Okere Constituency, he said though it was painful NDC lost the 2016 election, he believes it was a mysterious way God wanted Ghanaians to appreciate the developmental efforts made by the NDC at the back of the failed promises of the NPP.

“…God is great and does all things beautiful because though it was painful we lost, but today when you carefully look back you will notice that whatever God does is for a purpose. He wanted Ghanaians to have a comparison of the two administration, because if we had won the 2016 election, some Ghanaians would have still not appreciated our efforts instead will presume that, if NPP had won, in Abiriw here they would have established a big company to create Jobs for the youth, the $1million dollars had been disbursed, or every village had gotten Dam among many others”.

To him, Ghanaians have seen the reality on the ground and have regretted voting the NDC out of power.

According to him, the government would have succeeded if only they followed the “clear plans” of the opposition after they won the elections.

“I have something to offer. Ghanaians have seen what I can offer. The change of 2016 has not brought about any positive outcomes. The plans we laid out were very clear, and if followed would have move us forward faster. Today, Ghanaians are the judges. #JohnMahama