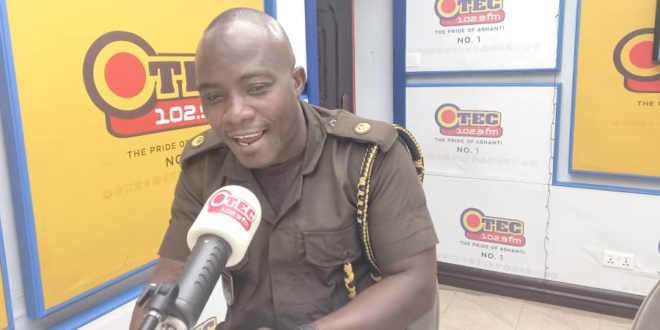 The Ashanti Regional Public Relations Officer for the Ghana Prisons Service, ASP Richard Bukari says, overcrowding at penitentiaries in the region is impacting negatively on their reformation agenda.

“Most of the inmates go out without the expected reforms due to our inability to give them the necessary training, skills and education they need while serving at their term at prison”

“The infrastructure at the various prisons service particularly the Kumasi Central Prison is struggling to contain the inmates, making it difficult for proper reform activities”.

ASP Richard Bukari was speaking on the Kumasi based OTEC 102.9 FM’s morning show Nyansapo on Tuesday January 24,2023 when he disclosed this the Captain Koda, host of the show.

“Constructed in 1901,the Kumasi Central Prisons which was supposed to house 450 inmates is now holding over 1925, the number of inmates even exceeded 2000 during Christmas and you can imagine the percentage of overcrowding at the facility “.

“For one to be reformed, the person needs to be taking through a holistic training to get him engaged once they are out of prison, and i must emphasized that reformation is very related to rehabilitation where those involved must be provided with a number of infrastructure and logistics to achieve the ultimate goal”. He said.

While commending government for the continuous support to the Ghana Prisons Service, ASP Richard ASP Bukari has appealed to the public and other major stakeholders to help provide them with logistics and other infrastructure that will help them reform prisoners.

Previous Shatta Wale, Tracy Sarkcess, other celebrities that have reacted to Samini-Sarkodie feud
Next We can’t reduce prices of goods due to 2.5% increase on VAT – Ashanti Business Owners Association