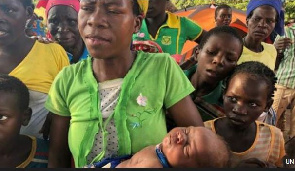 A woman gave birth in a mango tree while escaping floods in central Mozambique caused by Cyclone Idai.

Single mother Amélia delivered her daughter, Sara, whilst clinging to the branches with her two-year-old son.

The family was rescued two days later by neighbours, following storms that have killed more than 700 people.

It comes nearly 20 years after another miracle baby, Rosita Mabuiango, was born up a tree during flooding in southern Mozambique.

“I was at home with my two-year-old son when suddenly, without warning, the water began to enter the house,” she told the UN children’s agency Unicef.

Previous BoG did not spend any reserves to stabilize the Cedi – Bawumia
Next I’m sad for Bawumia, NPP using him to do dirty job – Sorogho