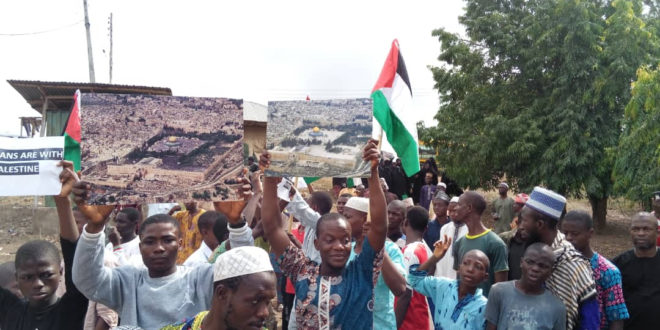 “Africa for Palestine”: Activists in Nigeria and South Africa call for end to Israeli occupation of Palestine

Nigerians and South Africans joined tens of thousands of Palestinians in the Gaza Strip in commemorating the first anniversary of the Great March of Return and Palestinian Land Day on Saturday. Over 250 Palestinians have been killed by the Israeli army over the last year during protests that aim to challenge Israel’s blockade of the Gaza Strip. Palestinians are also using the protests at the Gaza-Israel fence to draw attention to their right to return to homes from which they were displaced during Israel’s creation in 1948.

On Saturday, hundreds took to the streets in Iwo (Osun State), in a march organised by Nigerian Friends of Palestine. “Until freedom is attained we will remain committed to the Palestinian cause,” said spokesperson Daood Imran Molaasan in an interview with the Afro-Palestine Newswire Service. “Today, we are defending a just cause and we need not be Palestinians or Muslims to do so,” he added.

Other Nigerian rights activists and Muslim scholars have hailed the Palestinians for resisting their occupation by Israel.

“The Palestinian struggle is about the existence of a generation of people who keep fighting, and they must continue to sustain the struggle until justice is achieved,” said Nigerian author and veteran broadcast journalist, Abdur-Razaq Abdus-Salam.

Also on Saturday, South Africans gathered at Constitutional Hill in Johannesburg for a tree-planting ceremony and protest organised by the Palestine Solidarity Alliance to commemorate Palestinian Land Day and the anniversary of the Great March.

Meanwhile, countries in southern Africa are, this week, gearing up for Israeli Apartheid Week (IAW) – an international series of self-organized rallies, protests, lectures, cultural performances, and workshops held annually in over 250 cities, communities and campuses across the globe, that aim to create awareness of Israel’s occupation of Palestine and its human rights violations against Palestinians.

According to IAW spokesperson, Palomina Jama, hundreds of events are planned between 1 and 7 April in South Africa, Swaziland, Zambia, Botswana, Lesotho, Namibia, and Mozambique.

“Africa For Palestine” is this year’s continental theme for IAW and the campaign will focus on the historic relationship between African liberation struggles and that of the Palestinians, explained Jama. 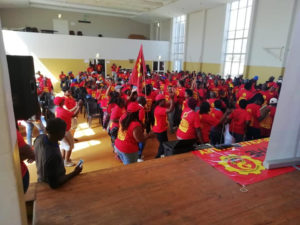 Centred primarily in South Africa, IAW comes at a time when Israel is facing increasing pressure from South African civil society and government to end its occupation. Pretoria is currently in the process of downgrading its embassy in Tel Aviv to a liaison office. The University of Cape Town is considering a boycott of Israeli universities.