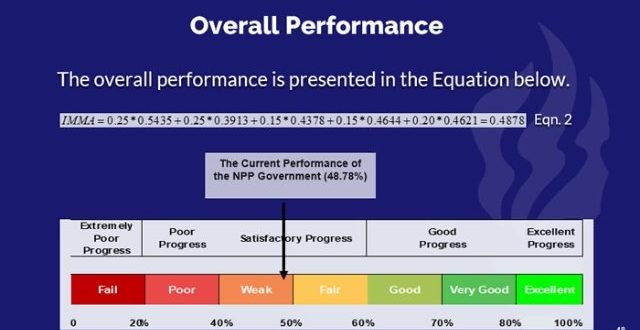 Think tank, IMANI Africa, has scored the Nana Akufo-Addo government an overall mark of 48.78% with regards to the fulfilment of its 2016 manifesto promises.

The think tank also scored the government 54.35% for how it has managed the economy, stating that out of a total of 162 promises, only 41 have been implemented.

The scores are contained in the policy think tank’s 2019 Imanifesto report.

IMANI’s manifesto assessments of the ability of elected governments to substantially deliver on the commitments they make to their constituents have become a necessary activity on the Ghanaian electoral calendar.

The assessment in the case of successive Ghanaian governments since 2008, has taken the shape of

1. Assessment of the manifesto’s ability to transform the Ghanaian economy along with some baseline parameters,

2. An interim (midterm) assessment of the winning party’s commitment to the manifesto, and

3. A final assessment of the execution of promises over the term of the government, considering various opportunities and threats the government could have been exposed to, domestic or internationally.

The final assessment provides the basis for understanding the state of key sectors of the economy, prior to an election, which corroborates the expectations of citizens.

According to IMANI Africa, the Nana Addo Dankwa Akufo-Addo led government has travelled three out of four years of its time in office, pursuing various policies and reforms some of which it believed to be core to the delivery of the ‘Ghana Beyond Aid’ agenda.

The 2019 IMANIfesto scores the performance of the government and explores how major policy initiatives carried the ordinary Ghanaian along in pursuit of their own economic advancement, with particular emphasis on delivery of sustainable jobs through a systemic recovery of the economy, and improvement in governance.

Read the full report below.