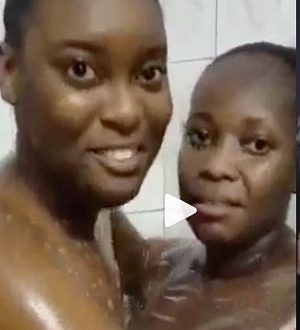 A romantic video of two lesbians (one a soldier and the other a civilian) who recently allegedly got ‘married’ has hit the internet.

News of the lesbian couple getting married has been the talk of town due to the fact that homosexuality is outlawed in Ghana and homosexuals are generally disliked.

The video shows the lesbians having an intimate time in a bathroom. Both are completely naked and hugging. They are seen kissing and smooching each other passionately and then having sexual pleasure in other ways.

The facial expressions show that they are aware that a video is being taken. They smile to the camera and laugh romantically.

The soldier, rumoured to play the role of the man in the relationship, after their alleged marriage has been facing disciplinary proceedings from the Ghana Armed forces.

The couple has reported vanished into thin air so as to escape the public scrutiny brought upon them by the media.

In a post on her social media handles, Rachel Appoh condemned the conduct of the officer and asked the GAF to deal with her.

“It is most unfortunate that this nauseating act would be emanating from Ghana’s Military that has gained such international repute and pedigree for its discipline in all facets of its activities”.

“We urge the Military High Command to take decisive action to purge itself of the collective disgrace this single act of indiscretion has brought to the GAF”.

Rachel Appoh who claims to have conducted investigations into the incident made further revelations about the ceremony.

“Sources say the event took place at an undisclosed rented apartment last Saturday at Takoradi in the Western Region at the blind side of the parents of the ‘couples’” she wrote.

She said that the action of the army officer is an affront to the norms and values of the Ghanaian society.

“The Office however unreservedly condemn this act in no uncertain terms and advise the youth not to copy such immoral acts irrespective of who is perpetrating it”.

“The Office wants to emphasize that the fact that the person involved in the instant act is a military officer does not make it an acceptable behaviour in the country”.