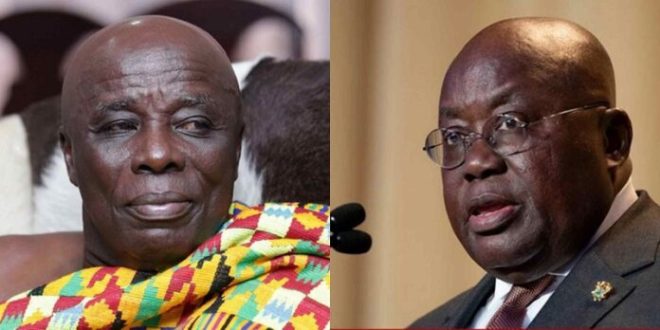 Your achievements have shocked your opponents – Okyenhene eulogies Akufo Addo

Okyenhene Osagyefo Amoatia Ofori Panin says he would be shocked to the bone if Ghanaians go to the poll and vote against President Akuffu Addo.

He said any eligible voter who has benefited from the numerous social intervention programs and other infrastructure development under the Akufu Addo government must honor the president with a second term.

Addressing a durbar of Chiefs and people of the three Akyem States of Abuakwa, Bosome and Kotoku, Okyenhene said the president has distinguished himself and deserves a second term.

He recited the lyrics in Sarkodie’s ‘ Ofee tso’ music to make his point.

According to Osagyefo Amoatia, Akufo-Addo’s great achievements during his first term will secure his victory in the upcoming elections.

“Your One District One Factory, One Village One Dam, Free SHS, Planting for Food and Jobs, the NABCO initiative, your numerous infrastructure projects like roads have all yielded good fruits; and like Jesus said a tree that yields good fruits must be made to grow’ Osagyefo

‘Just like the singer, Lucky Mensah, said in his songs, Nana Akufo-Addo has exceeded all expectations as President and must be given the nod to continue for a second term.

The Okyenhene noted that, the people of Akyem have also seen the development under Akufu Addo as was echoed by Asantehene this week.

Okyehene is the second-high profile traditional ruler to have make statements that endorse the second term bid of President Akufu – Addo in the upcoming December 7th.

Asantehene, Otumfuo Osei Tutu II, on Monday assured the President that his record in office “will speak for him” in this year’s election.

Kyebi came to a standstill on Friday when the three Akyem States of Abuakwa, Bosome and Kotoku held a durbar to honor president Akufu Addo and welcome him home.

President Akufu Addo on his part hinted, his commitment and loyalty to Ghana were inherited from his grandfather and father who were keen in the struggle of Ghana’s forward movement.

He hinted of his resolve to be truthful to Ghanaians and pursue the course of development.

Akufu-Addo pleaded with Ghanaians to give him four more years to do more.