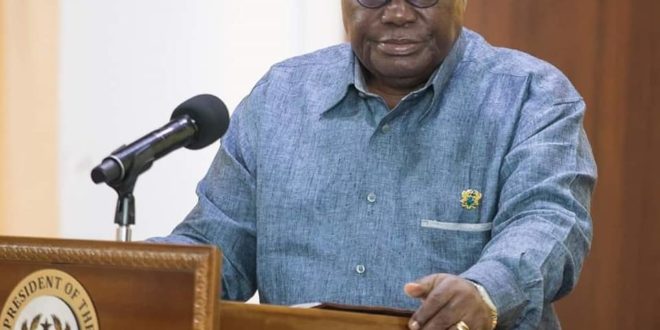 Achiase to benefit from starch factory under 1D1F – Akufo-Addo

President Nana Akufo-Addo has assured the people of Achiase of the establishment of a starch factory in the area under the one District, One Factory (1D1F) programme to create jobs for the people.

The President said Achiase would not be left out in his flagship programmes and disclosed that plans were underway to seek support from the Exim Bank for the setting up of the factory.

The President gave the assurance on Sunday following a request by Daasebre Gyeni Kenten, Chief of Achiase when he visited the town as part of his three-day tour of the Eastern Region.

The President also broke the ground for work to begin on the construction of a 40-bed district hospital for Achiase and inspected ongoing road projects at Akyem Swedru and Akyem-Oda.

President Akufo-Addo called on the people of Achiase to vote for him and Mr Kofi Ahenkorah Marfo, the NPP Parliamentary Candidate for the constituency in the upcoming elections to continue his good works.