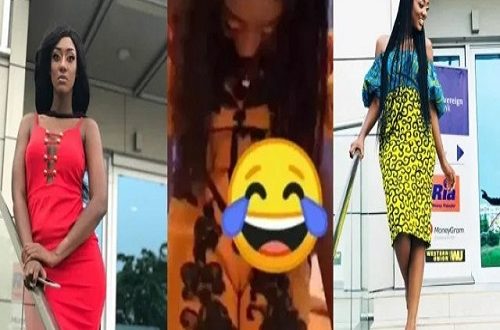 GHOne Tv presenter Regina Van Helvert has set the internet on fire after exposing her t0nga in a video Fillabase.com has sighted.

In the video, Regina Van Helvert mistakenly flaunted her ‘meat pie’ in a beautiful red tight dress which she was wearing.

In her attempt to show off her dress, she opened her two legs and the size of her big ‘tonga’ popped up.

However, her friends including actress Yvonne Nelson started laughing at her.

Yvonne Nelson in reaction to Regina’s thing was heard saying, “This be elephant toe.’

Regina Van Helvert then laughed and walked away from her friends and the camera.

Regina is one of the most sought-after TV presenters in the country since she shot to fame some years ago.

It is without any doubt that Regina is one of the prettiest faces we have seen on EIB Networks’s GhOne TV.