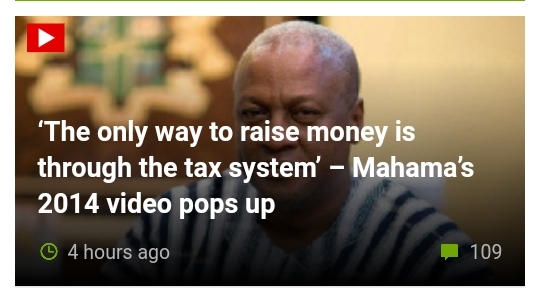 WATCH: ‘The only way to raise money is through the tax system’ – Mahama’s 2014 video pops up 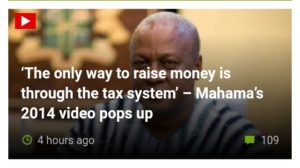 Amid the talk about the imposition on new taxes in the 2022 budget as presented by Finance Minister Ken Ofori-Atta, commentators have expressed varied views about the propriety or otherwise of these taxes.

With about a week to the presentation of the budget, former President John Dramani Mahama prophesied on the final leg of his ‘Thank You Tour’ that the 2022 budget was going to impose more taxes because the economy was in crisis and the government had no viable way of raising funds.

He told the chiefs and queen mothers in the Greater Accra Region that, “this government has been on a spending spree, borrowing spree, today, debt is overwhelming us.”

He predicted that taxes mainly on utilities were set to go up in the budget.

Whilst government did not increase taxes on utilities, it introduced the now controversial Electronic Transactions Levy (E-levy) and a 15% increment on government fees and charges.

It was played on NET2 TV’s ‘The Seat Show,’ on which the host was discussing what he described as hypocrisy on the part of the opposition on the subject of taxes.

What Mahama said about taxation – listen from 1:18 minutes – 1:22 minute mark

“For government investment and expenditure, the money doesn’t come from anywhere, it comes from ourselves and especially you have a country where the number of people who know that they must pay tax on income, do not exceed 30% of the population.

“Almost 70% of the population pay only indirect taxes and so you either have to go and knock the shop and take a daily rate and at the end of the year we are all supposed to file our taxes and declare our incomes and you say, you pay 1000 cedis, you pay 500, you pay this.

“70% or more of our people don’t file their tax returns. And so the only way you can raise money really is through the tax system and the only way you can get everybody to contribute is through indirect taxes and indirect taxes include like consumption of petroleum prices and so those who consume more, like you have a V8 and you buy more petrol, then you are paying more tax.

“If you sit in a trotro, you are paying less tax, because 15 of you are in a trotro using the same fuel and so those are some of the things that we are faced with. It is not every decision that will be popular. But what was I elected for, to make decisions that are popular? If I took popular decisions to make you happy with me, this country will be on the ground by now.

What Mahama told the chiefs on November 10

“So the economy has been run into a ditch and I know that in a few days’ time, they will read the budget and it’s the intention of this government to increase taxes and increase tariffs on electricity and water and all that,” Mr. Mahama

Source: www.ghanaweb.com
2014 IS MAHAMA'S MONEY only POPS raise SYSTEM TAX THE through TO up VIDEO way 2021-11-25
Elvis Anokye
Share