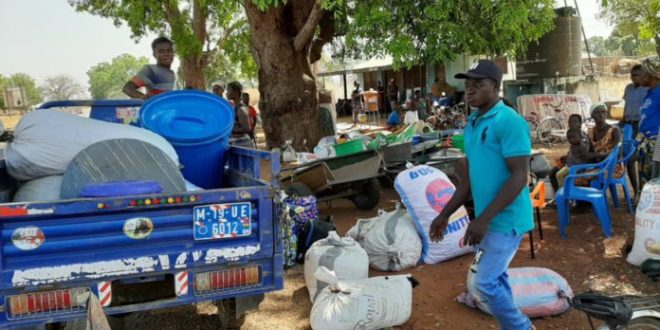 Three persons are reported dead and about 10 houses burnt at Kandiga and Doba communities in the Upper East Region after a land dispute.

Deputy Superintendent of Police (DSP) Francis Oppong Agyare, the Kassena-Nankana Municipal Police Commander, who confirmed this to the Ghana News Agency (GNA), said out of the number of persons killed, two were males and one female.

He said officials of the security services in the Municipality, responding to a distress call, met some of the houses in flames.

The police called officials of the Ghana National Fire Service to extinguish the fire adding “we were able to save a lot of houses that would have been burnt down.”

“We have made a number of arrests, so far we have arrested 11 persons and they are in our custody and being prepared for court in the shortest possible time.”

“We were able to also retrieve some weapons from them; one pump action gun and three single barrel short guns, twelve live carriages.”

DSP Agyare said security in the area has been beefed up, and calm has been restored in the area.

“We are not taking chances, we will ensure that the place returns to normalcy and the inhabitants can go about their normal duties without any hindrance.”

DSP Agyare said there was a land dispute between the Doba and Kandiga communities that the Municipal Security Council (MUSEC) had been managing over the months.

He explained that “ee have been managing it for sometime until yesterday when a 23-year-old man was murdered on his way to his farm.

This young man was from Kandiga but allied to the Doba Chief, so he was murdered by people believed to come from Kandiga, he stated.

“That is what we have seen, initially what started as a conflict between Kandiga and Doba subsequently turned to be an intra-conflict between some members of the Kandiga community itself, and they were targeting those that they think aligned themselves with the Doba Chief,” DSP Agyare said.

There has been a long-standing dispute between the people of Doba and Kandiga over land, which compelled the municipal security council to impose a twelve-hour curfew in the two communities for the past months.

When the GNA visited the two communities, some residents of Kandiga had packed their luggage and were leaving the community.

The others sat at the customs checkpoint on the Navrongo-Bolgatanga road with their luggage.

The town was deserted as at 12:00pm when the GNA visited. Most shops and houses were locked, while a combined team of military and police personnel were seated at vantage points to ensure peace in the area.

Some residents including children from Kandiga, who were seated at the checkpoint, shared their experiences and called on the government to intervene and ensure that peace is restored.

An 80-year-old Mr Atogewelige Akolbire, said he was always indoors due to his age, and therefore had no idea what started the disturbance.

“I was carried to this place for safety. I want to appeal to the government to come to our aid.”

Other resident Madam Rebecca Apuri said “our concern is that the security personnel working here are not helping us.”

“If both communities are under curfew, how were the people able to penetrate and shoot guns to kill? If the curfew was strictly enforced, I don’t think this would have happened.”

Previous ‘Nana Addo wants to use Rawlings for sacrifice before Jan. 7, he is not dead yet’ – Ibrah One Alleges
Next Armed robbers attack rural bank, bolt with GH¢93,445