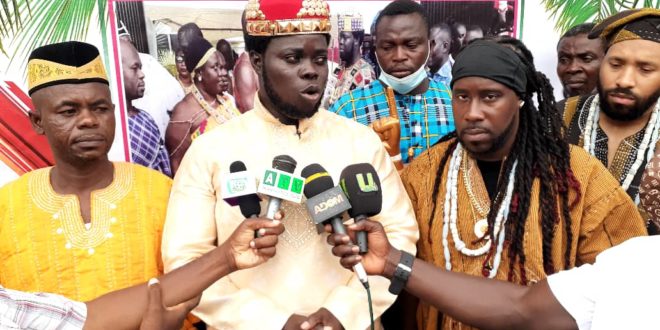 King Oyanka Noted During an Interview with a group of Media and Tv Host on a Live Show that. There are soo many Kings and Queens Today. Who can’t even identify who they are and what they represent? People are on social media places like Facebook,  Twitter, Instagram, LinkedIn and so on with titles as. Hrh, HRH, HRM.

Were they royals? Were they Kings and Queens? King Oyanka Quizzed.

King Oyanka angry served as a warning to African Americans in Diaspora who came back home to Africa and were awarded Ambassadorial positions to help develop Africa but have turned themselves into Her Royal Highness and His Royal Highness.  In my next episode and interview, I will be mentioning names and exposing them all and their positions will be revoked because this is a violation of the ancestry protocols.

King Oyanka, A traditional royal Ruler of Ga Tunnmaa We Royal Dynasty and a Descendant Royal Prince of the Great Benin Kingdom of the Amazons Warriors says every King or Queen must be to tell the rooms and origin of their ancestors and what there.

King Oyanka has since Written a book which captures the great history of his ancestors and the Kingdoms and his leadership which is yet to be officially launched but is also published on Amazon titled: The Leadership Experience And Life of King Oyanka. (The Digital Crypto Assets King Of Africa. )

Previous Buhari ruled under uncertainty, I know the way – Tinubu
Next King Oyanka Warns Wannabes ” The Creation Is not Greater Than The Creator