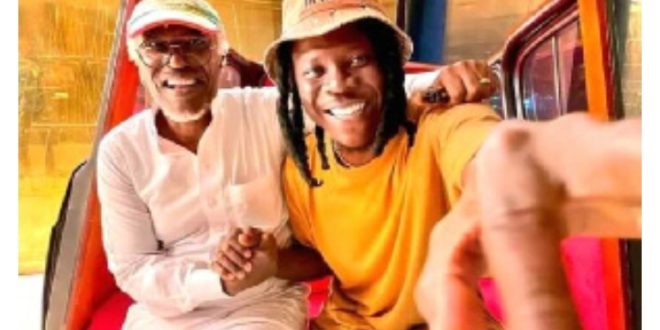 Stonebwoy has been spotted shooting a music video with the legendary artiste, Seydou Kone, popularly known as Alpha Blondy, on his iconic song ‘Jerusalem’ which was produced in 1986.

This comes after Alpha mentioned in earlier reports that he had recruited dancehall artiste, Stonebwoy, to add some spice to his evergreen song.

In a video that has since gone viral, Alpha Blondy was spotted on a vast land assumed to be on top of a hill, with the BHIM Boss who donned a black attire.

This has since gotten social media users talking about the collaboration.

Stonebwoy becomes the first musician to produce an official remix of the song with the legendary artiste a little over a decade since he rose to prominence in the music scene.

The remixed song by the two artistes, according to Alpha, was composed to herald the diversity and concurrence among Christians, Jews, and Muslims in Jerusalem.