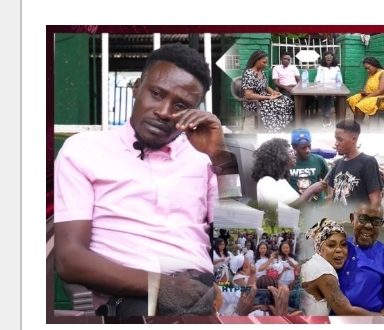 The family of 34-year-old Kwesi Hankson, who received a hot slap from Afia Schwarzenegger, during her father’s funeral, have asked the comedienne to either compensate or issue a public apology with immediate effect or face their wrath.

Kwesi’s two younger sisters who spoke on behalf of the family, have issued a three-day ultimatum to Afia to redeem their brother’s image which is currently on ‘life support’.

In an interview with Oheneba Channel, they stated while registering their displeasure that their brother has currently been reduced to a subject of mockery in his area.

According to them, their brother barely steps out of his room due to the fear of being taunted.

“We are giving Afia Schwarzenegger three days to render an apology or compensate my brother or else. What she did was an embarrassment. Now my brother cannot go anywhere. He is stuck in his room because his image has been tainted.”

When I saw the video I was extremely pained. My brother has a very strong personality but he sometimes chooses to ignore certain things. In my family, we have been thought manners and it is important to show respect to everyone regardless the age. In all, I was very glad he didn’t retaliate so everything will be on her. She has assaulted our brother and we won’t let it slide. Afia has done her worst.”

Asked whether they intend to report the issue to the police they said;

“In Ghana, everything is about connection. She is a celebrity and we fear this case will become a foolish one even if we decide to report to the police station.”

The victim also admitted on the same platform that he has been subjected to ridicule for not retaliating Afia’s slap.

“Now I’m being hooted at in my area. People are mocking me, saying why I allowed a woman to slap me. They are saying that I am not man enough. I’m now a laughing stock in my area. I have friends in the military who I play the live band with. I’m really pained about what happened to me. Even if you’d act like that, it’s not supposed to be your father’s funeral. Did you deliberately kill your father in order to make money?” he stated.

However, Afia Schwarzenegger has insisted that her reason for slapping the victim was because he was caught abusing one of her sisters.

She said the man in question, forcibly harassed her sister for money which was being sprayed at the funeral grounds.

“You can’t come to a funeral with such uncouth behavior. My elderly sister who is my father’s daughter was picking money sprayed on me and this man had the guts to squeeze her hands just to take the money from her. How dare you abuse my sister right under my watch. It wasn’t because of the money.

That slap was just the tip of the iceberg. If it wasn’t for Diamond Appiah whom I have much respect for, I would have landed three dirty slaps on his face. All those who took to social media to spew nonsense, tell them that I have just not met them physically. Don’t play with me because my left hand is very fast. Let this be an example to you all… that lady he abused is over 50 years old,” Afia earlier said.

Previous What is trending today?
Next Afrochella organisers to drag Asakaa Boys to court