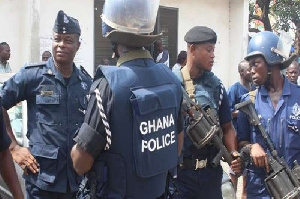 The Greater Accra regional police commander nearly had his head smashed during the traders’ chaos at the Kwame Nkrumah Circle on Monday, the Nima police chief has said.

According to ACP Abraham Acquaye, not even the presence of the police at the premises could deter the feuding traders from pelting stones and attacking each other.

“The police headed for circle to bring calm. My commander’s head was nearly smashed by a stone that was thrown. Looking at the tension that was brewing, we asked the Nigerians to leave the market and they reluctantly did so,” he told Francis Abban on the Morning Starr Tuesday.

Nearly 600 Nigerians shops were locked up by angry members of GUTA on Monday over claims the Nigerians are violating local laws. They argue Ghanaian laws do not allow foreigners to engage in retailing.

The feud between GUTA and Nigeria traders, in particular, spans over 20 years.

According to the leader of the Nigerian traders in Ghana, Chief Emeka Nnaji, some members of the Ghana Union of Traders Association (GUTA) are seeking political office in the ensuing year and so need to announce their presence.