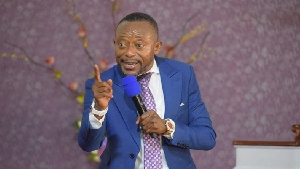 According to Rev Owusu Bempah, although he was prevented from exchanging pleasantries with John Mahama, the erstwhile president, nonetheless, extended a hand to give him (Rev Bempah) a handshake.

“I was impressed when former President Mahama extended his hand to give me a handshake despite the scuffle.”

Rev Isaac Owusu Bempah was allegedly assaulted by some members of pro-opposition NDC party militia group, the Hawks when he made a move to have a quick word with John Mahama.

Reports say before he got to Mr Mahama, the former President’s host of bodyguards following him, accordingly stopped and shoved the Man of God aside.

Both former President John Mahama and Rev. Bempah had reportedly been invited by the Assemblies of God Church to grace its 30th Anniversary.

Narrating his side of the story, Rev Owusu Bempah stated that he had to leave the occasion earlier because he had to go and preach at his own church.

He added although he was asked by the Host Pastor to exchange pleasantries with the guests present, he had already planned to pay his respect to the former president and the other dignitaries present.

Speaking in an interview on Okay FM’s Ade Akye Abia, the controversial preacher stated that he was disappointed at the turn of events maintaining that he had no ulterior motive other than only greeting former John Mahama and other VIPs who graced the 30th anniversary of the Church.

“I have nothing against former president Mahama. I had already planned to greet him before proceeding to Hon George Appaih and Sammy Awuku before leaving the premises. I started from a pastor who sat by Mahama and when I got to president Mahama, some people from nowhere rudely pushed me aside in a bid to prevent me from extending a greeting to him (Mahama).”

A disappointed Rev Bempah added, “The way it happened wasn’t good but it was only the grace of God that allowed me to shake hands with ex-President Mahama.”