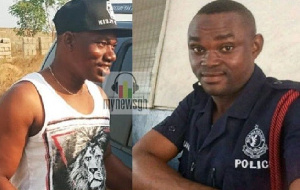 Police detail how 2 uniformed officers were killed by armed robbers

The Ghana Police Service has detailed how two of its officers were gruesomely killed in broad daylight my armed robbers at Gomoa Buduburam in the Central Region.

According to a situational police report sighted by MyNewsGh.com, at about 1pm on Wednesday August 28, 2019 the police administration received information that two Motor Transport and Traffic Directorate (MTTD) personnel had been shot and killed by unknown assailants.

Earlier that morning at about 6am, Chief Inspector Quansah who was in charge of five other ranks including Sergeant Michael Gyamasi and Lance Corporal Awal Mohammed ( now deceased) of Kasoa MTTD detachment were detailed for task force duties at Kasoa- Winneba highway.

That about 12:23pm they intercepted an unregistered Blue/black Toyota Camry with some occupants on board.

The policemen on duty stopped the vehicle for routine check but they sped off. Sergeant Gyamasi who was the service driver and Lance Corporal Mohammed Awal chased them with the service Vehicle GP 3632.

Few metres away the driver of the Camry stopped and the two policemen accosted the occupants of the vehicle but in an attempt to arrest them, one of them shrugged the police off, went and picked a pistol from the car and shot the two officers.

The sergeant ran to take cover in a provision store nearby but his assailant followed up there and shot him three times on the head killing him instantly.

The Lance Corporal who was also shot twice died on his way to the hospital while suspects bolted but abandoned the vehicle at Kokrobite.

A search in the vehicle revealed a registered document of rugger pistol, number 343-61265 bearing the name of Eric Kojo Duah. Six 9mm spent shells were found at the scene.

Three suspects identified Ibrahim Zakaria, Issac Amissah and Dominic Commey were later arrested and detained to assist in investigation. The bodies of the policemen have been placed in the police hospital morgue. Further development will be communicated.

One of the suspects was identified by witnesses at the scene as being with the chief mastermind with the other suspect claiming ownership of the vehicle.

Meanwhile the key suspect, Eric Kojo Duah, who is believed to have perpetrated the act is yet to be arrested.

Previous 4 Contractors Dead, Others Call For Govt’s Intervention
Next Abossey Okai: Shops, businesses close due to stench from police flats