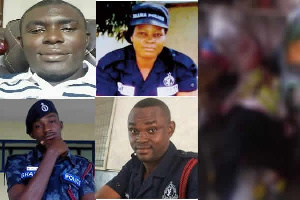 Sani who was speaking to Starr News in the wake of the gruesome murder of two police officers by suspected armed robbers at Aplaku, a suburb of Kasoa in the Central Region said perpetrators of such heinous crimes must be handed a death sentence.

“…The death penalty is still in our statutes even though nobody has been killed for the past three decades or so, but, I think the death penalty could be implemented against persons who killed officers because it is becoming one too many,” he stated.

The officers, with the Kasoa divisional command, were engaged in a gun battle with the suspected robbers after they gave them a chase upon a tip-off.

One of the officers died on the spot after he was hit with a bullet while the other died at the Winneba government hospital, Starr News has gathered.

“Whatever they said they provided is insignificant,” he stated on the Morning Starr Thursday. “It is not only now it has always been the same, the powers that be do not seem to care about the men that they put out there to protect them.”

Meanwhile, the Acting Inspector-General of Police James Oppong-Boanuh says the service has taken delivery of 4,500 bulletproof vests for patrol officers.