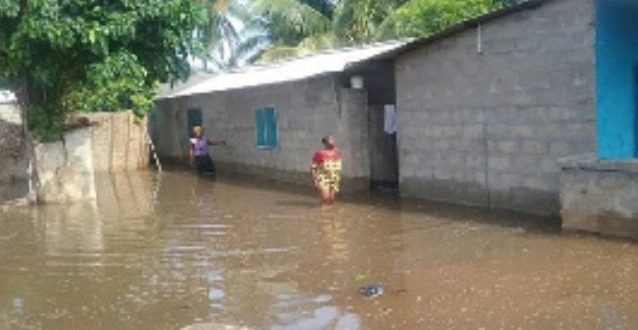 Over 80 buildings in Agavedzi destroyed by tidal wave

Share
The assemblyman for Agavedzi electoral area, Eben Affah, has disclosed that over 80 houses have been destroyed by the tidal waves that hit some communities in the Ketu South Municipality on Sunday, April 3, 2022.

According to him, aside from the destruction of properties, the disaster has brought to a halt normal activity including commerce and education in the Agayedzi community, asaaseradio.com reports.

“Yesterday, the tidal wave hit back at Agavedzi community again, which is very terrible and then so many houses were full of sea water. We had to gather boys to cut the major roads linking from Aflao to Keta so that the seawater can have its way to the lagoon, so that it can ease the tension of the sea water. We have been able to sustain the situation.

“Before that, so many properties were damaged, some cemeteries too were affected and then the sacred forest, and people living around the road too were not happy with the happenings of yesterday. So far, it is 88 houses that have been damaged by the tidal wave,” the assemblyman is quoted.

This will be the second time in less than six months that tide waves have hit the Keta Municipality in the Volta Region.

On Sunday, November 7, 2021, tidal waves hit the municipality causing a humanitarian crisis as thousands of local residents in communities along the coastal belt including Kedzikope, Keta Central, and Abutiakope got displaced and stranded.