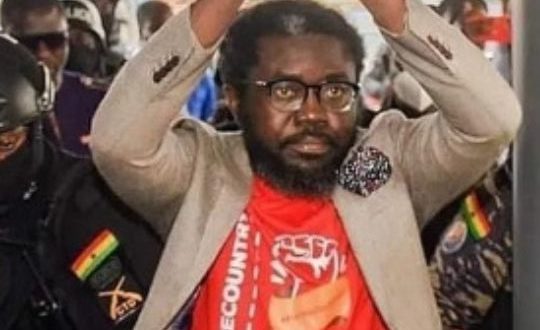 Mr. Barker-Vormawor was picked up by security personnel this morning.

His whereabouts are unknown.

Another convener of #FixTheCountry, Benjamin Darko, confirmed his arrest on the Class Morning Show on Class91.3FM.

Mr. Barker-Vormawor is on a GHS2-million bail with two sureties, one of whom is to deposit documents of his landed property to the court.

Oliver Barker-Vormawor has been charged with a treason felony by the police.

He was arrested on Friday, 11 February 2022, at the Kotoka International Airport when he returned from the UK for making suggestive coup threats on social m

The police indicated that his “post contained a clear statement of intent with a possible will to execute a coup in his declaration of intent to subvert the constitution of the Republic.”

He had suggested in a Facebook post that if the e-levy was passed: “I’ll do the coup myself. Useless army!”