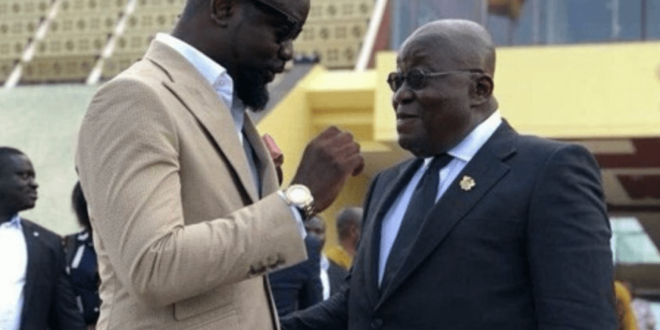 My song not an endorsement for you – Sarkodie to Akufo-Addo

Rapper Sarkodie has asked the President of Ghana Nana Addo Dankwa Akufo-Addo not to take advantage of his song because it’s not an endorsement of his second tenure.

Sarkodie released a song titled ‘Happy Days’ and in the song the rapper said “If today I have light and my kids [will] go to school for free then I applaud you… Nana, don’t stop. Keep going… The battle is still the Lord’s”.

The New Patriotic Party and its followers have since been promoting the song tagging it as an endorsement for the second term bid of the President.

But reacting to a tweet from the President of Ghana who was showing appreciation, Sarkodie asked the President not to take undue advantage of the song.

According to him, it’s not an endorsement of his candidature because he did not mention any political party.

He said “Nana M3nfa bronya ho nre akoko oo lool !!when I say aban ( all parties ) Shouts to yourself x JM but if i feel like pointing out the negatives too you know how we do”.