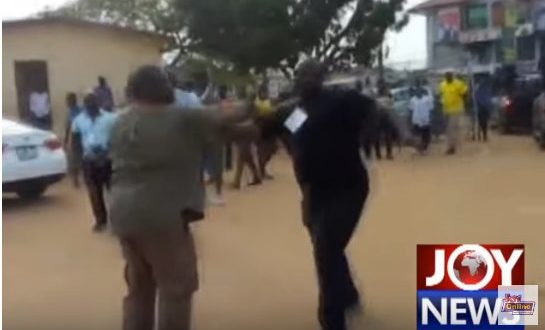 The Member of Parliament for Odododiodio has disclosed that the man who slapped Ningo Prampram legislator, Sam George, last week is a wanted man.

Nii Lante Vanderpuye said the man is already wanted in connection with an armed robbery incident in his constituency.

“We have known him to be an armed robber who has stayed in Old Fadama for some time. He was being pursued and he ran to the North and came down when there was a change of government,” he told Joy News’ Roland Walker on the AM Show Friday.

Sam George was slapped by one of the security operatives instructed by National Security Minister, Bryan Acheampong, to storm the residence of the NDC candidate in La Bawaleshie during the Ayawaso West Wuogon by-election.

The former presidential staffer posted on Facebook that he had been assaulted by people he described as members of the governing New Patriotic Party (NPP) vigilante group, Invisible Forces. He claims that they were wearing NSC shirts.

In a video, about 50-60 men are seen chasing the MP as they hurled insults and slapped him.

“[George] is traumatised. When I went to his home he was in the bedroom and couldn’t even move. I don’t understand why people would do this,” Chairman of the NDC, Samuel Ofosu-Ampofo, told Joy FM.

The action has widely been condemned by many Ghanaians and civil society organisations.

The Minority in Parliament has also called on the Inspector General of Police (IGP) to arrest the persons involved in the chaos that characterised the by-election.

Identifying the unnamed man, the Odododiodio MP alleged that when the NPP came into office, “he supported some people to harass, beat up and kill some NDC members in Old Fadama.”

Mr Vanderpuye said he has evidence to back his allegations because “we know him [assailant] very well.

“He is the son of the late Chief of Nanton. And just yesterday, he was involved in the assault and death of a houseboy in Sowutuom,” he said.

According to him, there is pressure on the police to release him and not prosecute him but he assured that “we will follow this case and pursue it.”

“This boy cannot go scot-free, he cannot be walking free on the streets of Accra in the name of being a member of the Invisible Forces,” he added.