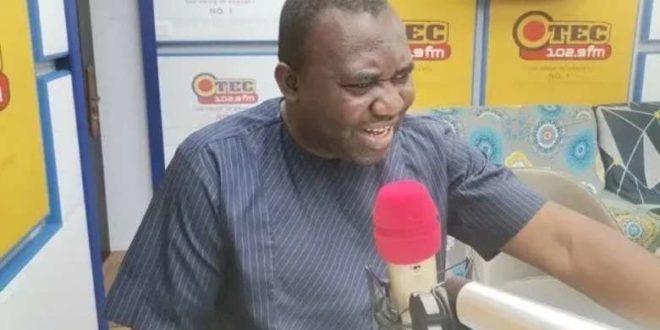 A Senior Lecturer at the Planning Department of the Kwame Nkrumah University of Science and Technology KNUST Dr Stephen Takyi has challenged the Ghana Bar Association GBA to lead overwhelming calls for constitutional review of the 1992 constriction as well as judicial reform.

He has therefore, urged the GBA to lead the advocacy in the implementation of Constitutional Review commission reports.

Dr Takyi believes the review when done,   would  help tackle constitutional deficits and aspects of the 1992 Constitution that seemingly bred apathy in the public, disengaged the public in major aspects of governance at both the grassroots and national levels.

Speaking on the Kumasi based OTEC 102.9 FM’s morning show dubbed “Nyansapo “, on Tuesday September 13; the planner said it was high time GBA leads the nation on the path of massive reforms in the country’s constitution to propel development for present and unborn generations.

“GBA have a huge responsibility and lead the overwhelming calls for constitutional review of the 1992 constriction as well as judicial reform to protect the interest of the ordinary citizens in Ghana”.

“One particular area that needs urgent changes is delays in justice delivery system, the lengthy time used to bring the finality of one case in Ghana thwart gains in the country’s Judicial system and so I am entreating the GBA to aid in these areas”.

“GBA should also be equally concerned about the appointment of Chief Justice, IGP and EC boss by the Executive”, the Canadian trained planner Dr Stephen Takyi the host of the programme Captain Koda.

He continued, “the powers given to the executive to appoint Chief Justice and other Justices to the Superior courts is too much and can create suspicion among the political divide, therefore, there is the need to divulge that powers from executives to ensure more transparence and trust of the bench”.

GBA is holding Annual General Conference in Ho under the theme: “Ghana’s Democracy under the Fourth Republic: Gains, Challenges and Prospects”.

The President, Nana Addo Dankwa Akufo-Addo, has asked the people of Ghana to say no to persons who have made it their passion to make disparaging remarks against the Judiciary and the Electoral Commission for selfish, parochial and partisan reasons.

According to President Akufo-Addo, “Just as government continues to implement policies to advance the rule of law, and, thereby, reinforce the confidence of the people, and shore up our nation’s reputation as a country governed by the rule of law, there are some who have made it their political agenda to disparage systematically the image of the Judiciary for selfish, parochial, partisan reasons.”

The Attorney General (AG) and Minister for Justice, Godfred Yeboah Dame  at the GBA Annual General Conference in Ho condemned the former president John Mahama over his latest comment on the judiciary. Mahama has criticised Ghana’s Supreme Court over its recent judgements, adding that the judiciary’s reputation had been severely tarnished.

“The image of our judiciary deteriorated that many of our citizenry openly make mockery of our Justice system and of our justices.,” the former president said recently. “The phrase; ‘go to court’ is these days met with derisive laughter instead of hope that one will truly get justice if he went to the court.”

Commenting on the Issue, Dr Takyi  who is expert in Development Planning observed that even though many operational aspects of the Constitution contained enough reasons to warrant a review, there had not been enough commitment, dedication and determination by successive governments to trigger amendment processes hence the need for GBA to intervene.