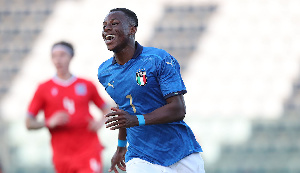 Ghanaian-born forward, Kelvin Yeboah, has disclosed the reason for choosing to play for Italy over the Black Stars.

The 21-year-old rejected an invitation to play for the Black Stars from former coach Charles Akonnor in June 2021, just to accept an Italy U21 call-up.

According to the Genoa striker, he grew up in Italy and feels more Italian than a Ghanaian.

“I arrived in Italy when I was two, I grew up in Italy and I feel Italian. I started playing in the youth sectors of Novara and Gozzano, then I went to London, to West Ham. From there I decided to move to Austria, to start from the Austrian Serie B to go up more and more.”

“Now the Genoa challenge is challenging and fascinating. We need the right energy,” he said as quoted by Calcionews24.

Yeboah returned to Italy in the winter transfer window after an explosive first half of the season with Austrian side Sturm Graz.