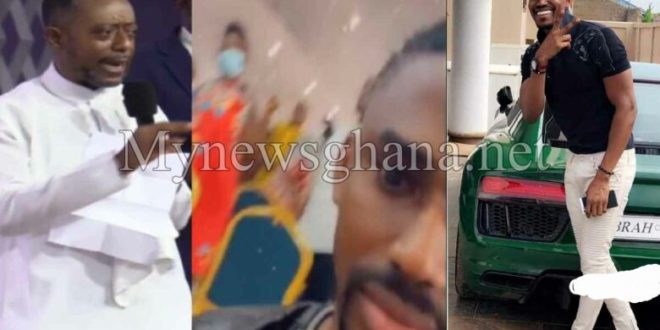 Young millionaire and businessman Ibrah One has in a new video shown how he visited the church of Rev. Owusu Bempah via a post on his social media handle.

According to Ibrah, he felt very bored at home and decided to visit the nearby church to fellowship leading him to the church of the man of God.

From the look of the caption which came with the video of Ibrah at the church, he was not there basically to worship God but just see how the man of God does his service as he shared what went down during the service.

Ibrah stated that he saw people forming a cue and was shocked and asked what the reason was only to be told that they were going to pay offertory which caused him to get angry and affirm that he would rather use his money to dress and give to slay queen rather than give to a man of God who is already rich whiles there are poor people in the society.

I woke this early morning and decided to visit any nearby church which heads me towards owusus’s bempah’s church. whiles I was there I saw many people walking in a form of cue this made me asked the people question about what was happening, I was told they were paying offertory. I became very angry and replied them that I’m not a fool to pay offerings to a rich pastor whiles the poor are out there suffering. I told them I will rather use that money for slay