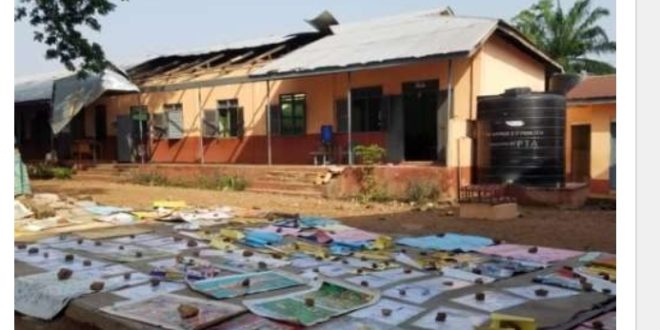 The rainstorm has also ripped the roof of the Roman Catholic (R.C) JHS school block and another private house at Kadjebi Zongo.

Speaking to the Ghana News Agency (GNA), Madam Gifty Obeng, the Headmistress of Kadjebi E.P Central JHS, said 103 students were affected by the disaster and called for urgent attention to remedy the situation.

She said the disaster would affect teaching and learning as the affected students were traumatised by the tragedy.

She appealed to the old students, NGOs and the Kadjebi District Assembly to come to their aid by putting up a new structure for the students.

Miss Janet Akuamoah, a victim of the disaster, said she was traumatised by the event and was dumbfounded.

The student and six victims of the disaster have been treated and discharged, said the happening would affect them emotionally and psychologically.

Mr Francis Norgbedzi, the Headmaster of Kadjebi R.C JHS, said 179 Form Three students, including 82 boys and 97 girls, were affected by the disaster.

Mr Norgbedzi said the disaster would affect teaching and learning and possibly affect the academic calendar as they would have no place to learn during the period.

He appealed to the Kadjebi District Assembly, philanthropic and NGOs to come to their aid and “the early they assist, the better it will be.”

Mr Joseph Nana Oboako, the Kadjebi District Director of the National Disaster Management Organisation (NADMO), has appealed to NADMO National Headquarters via Oti Regional Office to assist them with relief items for the affected victims.

He visited the affected areas and advised the residents to plant trees around their buildings to serve as windbreaks.