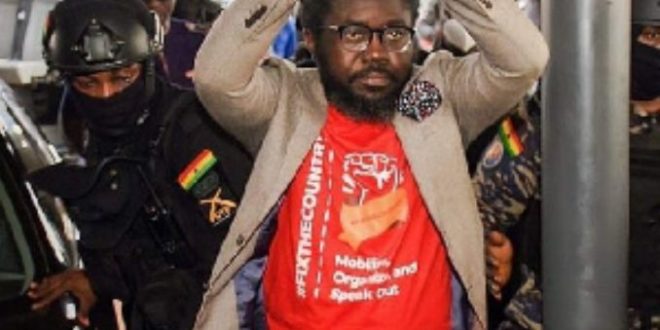 Share
After what has been a long-expected ruling of the Tema High Court in the case of treason felony brought against a convener of the #FixTheCountry movement, Oliver Barker-Vormawor, the youth activist can now get some ‘good sleep’ in the comfort of his own home.

Arrested on February 11, 2022, immediately he touched down in the country at the Kotoka International Airport, the embattled Barker-Vormawor has spent over a month in the custody of the police.

And it all came about when he made a comment on his Facebook page on February 10, 2022, that read: “If this E-Levy passes after this, I will do the coup myself. Useless Army!”

It did not take long for him to be dragged before the courts, leading to many weeks of prosecution.

On Wednesday, March 16, 2022, the presiding judge hearing a bail application for the youth activist, Justice Daniel Mensah, directed that the accused presents himself in court once a week, as would be scheduled by the police.

But how did things actually turn out in court on Wednesday when the GH¢2 million bail was granted? Here is an outline of how things panned out, as made available by GhanaWeb’s court correspondent, George Ayisi:

Facts of the case as read out by the presiding judge:

Justice Daniel Mensah read out that in responding to claims that the applicant Oliver by the State to the effect that, he had no place of abode in Ghana, he said that was not true as the police had made intrusive and thorough searches at his house.

On the matter of a search warrant issued by a Magistrate Court to have his mobile phone searched by the police, the applicant told the High Court that a challenge had been filed against the validity of the search warrant and the manner in which the police intended to execute it.

Additionally, the judge read that Oliver, through his lawyers, had stated that his statement was yet to be taken by the police.

Justice Mensah continued by reading out arguments by the lawyer for the applicant, Akoto Ampaw, to the effect that the facts of the case do not support the basis of the offense his client has been charged with.

He continued that even though the lawyer for the applicant acknowledged that the statement made by his client is condemnable, the crux of the statement does not constitute an offense and for that matter, it does not meet the legal threshold for a charge of treason felony.

He explained that the applicant’s lawyers maintained that the charge of treason felony was to deny his client bail. Additionally, he told the court that there was no evidence supporting such a charge.

The presiding judge, Justice Daniel Mensah, also read out the response from the State, led by Hilda Craig, where they argued that the applicant is not likely to avail himself to stand trial judging from the severity of the offense against him.

In his final ruling on the application, the presiding judge spelt out constitutional provisions that entitle an individual charged with an offense to bail, or otherwise.

He referred to Martin Kpebu (No. 2) v Attorney-General, in which the Supreme Court ruled that all offenses are bailable.

He further referred to provisions in Chapter 96 and Chapter 5 of the constitution which all outline the qualification for bail and issues around personal liberty.

Justice Mensah also explained that while the police insist that the applicant has no place of abode, the Republic has however admitted that Oliver has led the police to conduct searches at three different locations, which includes a residence and an office.

By this, the judge noted that it cannot be a ruse that the applicant has no place of abode as argued by the State.

On the issue of the applicant being a flight risk, the judge noted that there exists no doubt about the charge of treason felony and the seriousness of the punishments that come with it.

However, he noted that the above claims by the State ought to be viewed with scrutiny especially when the applicant, who is a PhD candidate at the Cambridge University in the United Kingdom has had his passport seized.

The judge formed a view that owing to the circumstances of Oliver Barker-Vormawor’s travel and the seizure of his passport by the State, he cannot be taken as someone who poses a flight risk.

He however noted the concerns of the State to disallow the police from accessing his mobile phone, even after securing a search warrant from a magistrate court but was quick to mention that the applicant had notified the court of a challenge filed against the search.

From the foregoing, Justice Daniel Mensah said “I have formed the view that the applicant is entitled to bail.”

His decision, he said, was made by coming to the conclusion that as ruled by the Supreme Court in the case of Martin Kpebu (No. 2) v Attorney-General, that “the court cannot absolve itself from granting him bail.”

Having announced his decision to grant the bail, the presiding judge sought counsels’ opinions on how to set the bail conditions.

In response, the State asked that the bail be set in such a way that the accused will be compelled to avail himself for trial.

The State also asked that the bail be justified, owing to the severity of the charge against the accused and the punishment for same.

The counsel for the applicant, Akoto Ampaw, stated that notwithstanding the offense and the punishment in the case, his client does not pose a flight risk but asked that Oliver Barker-Vormawor be granted bail with sureties.

“Secondly, it will be fair the accused is asked to report to police once a week,” Akoto Ampaw said.

Justice Mensah however added that it is important that the right of the accused to liberty is not unduly clogged with the demand for justice.

He continued to set the bail conditions but not before issuing an advice that whatever the case is, coups are never an option, no matter how one feels about a regime.

He noted his support for activism but emphasized that it should be done without undue calls for people to destabilize a country.

Justice Daniel Mensah then delivered his ruling of the bail, granting the applicant a GH¢2m bail with two sureties, one of which should deposit documents of a landed property.

Also, he ruled that his passport should remain in the custody of the Ghana Police Service.