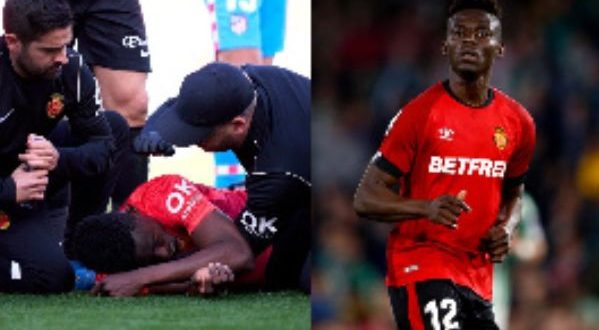 Black Stars midfielder, Baba Iddrisu collaped and was carried on a stretcher in their game against Atletico Madrid in the Spanish La Liga on Saturday, April 9, 2022.

Baba Iddrisu was taken to hospital after failing to recover from a head injury he sustained during his side’s 1-0 win over Atletico Madrid in the La Liga on Saturday night.

The 26-year-old fell to the ground after a challenge from France midfielder Thomas Benoît Lemar.

The Real Mallorca midfielder played a crucial role for Mallorca as they defended gallantly to hold onto their solitary strike to clinch a crucial one-nil win over the Rojiblancos.

Baba would have completed the game unscathed but in the dying embers of the game, the Ghana international’s face met a ferocious shot in the box as Atletico aimed an equalizer.

Iddrisu’s teammate rushed to his aid and demanded medical attention for the Ghana international who had completely gone off.

It took four minutes for the medics to revive Iddrisu whose face met a ferocious shot from Lemar in the box as the Rojiblancos aimed an equalizer.

The midfielder featured prominently for Ghana as they secured qualification to the 2022 World Cup in Qatar.