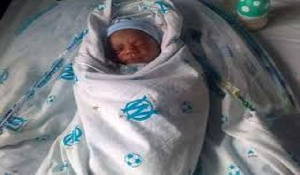 A lady who only identified herself as Adoley has narrated how her child was stolen from her at birth and trafficked to India.

Speaking on Angel FM’s Anopa Bofo, Adoley said she gave birth to a baby boy when she was in secondary school form 4.

“My child was shown to me but I was later informed that he is dead,” she narrated.

According to Adoley, she added that just after the baby was shown to her, she was given an injection that put her to sleep and so she could not realise anything that happened afterwards.

All of these happenings notwithstanding, a Man of God told her that she will find something precious which she has misplaced.

Three days later, someone called her from New Delhi in India, obtaining her contact from a nurse, and informed her that the said nurse said, it was her baby that was given to her.

She then inquired from the guardian who at this time was seventy eight years about the whereabouts of her child, to which the woman said the boy is at the university. She later had conversations with her boy and also got his child’s pictures which were sent to her by her child’s guardian mother.

Adoley is still in touch with her child who now lives in the United States of America with her Auntie because her boy’s guardian mother has passed on.

Adoley’s phoned in to narrate her story following reports that the Economic and Organised Crimes Office (EOCO) had led an operation to rescue a baby who was nearly trafficked by a doctor, nurses and some social welfare workers.

Below are some of the narrations from other callers

One of the women, who only identified herself as Mabel, recounted her ordeal she went through when she gave birth at the Mamprobi polyclinic some 22 years ago.

“My son will be 22 years should he be alive today”, she said, and added that after her delivery, she was waiting for her child to be brought in the nurses but that never happened.

While she waited for the nurses to dress the child and return the child, a nurse informed her mother that the child was born deformed and that if the child is given to her, she would incur so much cost but to no avail. So, they will inject the baby to kill the child so that she the woman will pay for her burial.

According to her, she wanted to see her child but she was prevented by the nurses. They explained to her that if she cast her eyes on her child, his deformity will cause her to be barren and she will cry all the time, and that was the end of it. She paid for the burial of her child and that was the last time she saw her boy child.

Mavis gave birth in March 1999 at the Komfo Anokye Hospital ward A5. She was later informed that the baby is weak and was transferred to ward A1.

She proceeded to A1 to have a look at the child and left. Upon her return, she was informed that her baby is dead. “That cannot be”, she said.

She went close to the lined up baby’s cot and saw her child but she was told that is not true. She remained vigilant and glanced through the cots and realised that her name is in one of the cots with the cot sheet. She then insisted that her baby is alive and not dead.

The nurses orchestrated the plot to offer the baby to a certain woman who keeps having still birth. Had she been negligent a bit, she would have lost her baby.

The interesting and ironic thing about this particular story is that the said baby who was nearly given to another woman is now a grown woman and also a nurse at the same health facility that attempted to rob her of her biological mother.

AN ELDER OF A CHURCH

His wife went through operation to deliver the baby but the child was a preterm baby and thus, was contained in an incubator.

He said, while the baby was in the incubator, he went home but when he returned to the hospital he was told that his child is dead. He followed up with the case but a certain small fridge was opened to him to show him the lifeless body of a child purported to be his dead child.

He added that his boy would have been 6 years should he be alive.

Previous Hon Francis Addai-Nimoh, Francis Owusu-Akyaw Others To Be Honored At  YAG2020
Next Kotoko banned from signing players