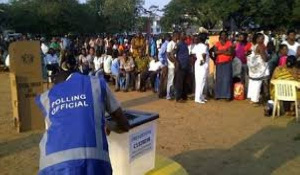 The 2016 Parliamentary candidate for the opposition National Democratic Congress (NDC) in the Jomoro Constituency of the Western Region, Mr. Thomas Yankey popularly known as ‘Nobody’ has indicated that his party will not sit aloof and allow EC boss Jean Mensa to rig the upcoming General Elections for President Akufo-Addo and NPP.

According to the NDC National Chairman, the Commission’s quest to compile a new register is a grand scheme to favour President Nana Addo Dankwa Akufo-Addo and the New Patriotic Party to rig the elections.

He alleged that the EC wants to achieve this aim by disenfranchising 11 million Ghanaian electorates, hence the Commission’s plan to use only the Ghana card and passport for the registration exercise.

Expressing his opinions on what is happening in Ghana about the incoming December polls, the NDC 2016 Parliamentary Candidate Thomas Yankey told Daniel Kaku that the NPP government wants to suppress the rights of Ghanaians to freely express their thoughts on important national issues.

According to him, before the current government was sworn into office, Ghana was among the best and most democratic countries in Africa, if not the world.

“Immediately the NPP took office, this adorable record Ghana had secured began experiencing ‘erosion’ with the activities of the vigilante groups culminating in unwarranted brutalities unleashed on opposition members including a sitting member of Parliament,” he noted.

“Journalists were not spared their share as they were, and continue to be subjected to physical abuse, the apex of which witnessed the assassination of a renowned investigative journalist who had put his life on the line in a bid to help uproot a canker of corruption from the country”, he added.

According to him, the trend continues with the invitation by the CID of the old man Major Boakye Gyan (Rtd), for exercising his constitutional right of freedom of expression, expressing his views on a national issue and giving wise counsel on the controversially entrenched and biased position of the EC boss, a behaviour that has the potential to plunge Ghana into a political turmoil.

“Who is blindfolded to see that the behaviour of the EC boss is gradually leading the country into chaos?”, he quizzed.

“Are we ignorant of the causes of political turmoil in Africa and elsewhere leading to military interventions? Is Ghana naturally exceptional, hence incapable of experiencing what (effects) others have experienced for behaving in the same way(s) those countries behaved?”, he added.

Mr. Thomas Yankey stressed that all these intimidations are to put fears in Ghanaians and to pave the way for the EC boss to carry on with her rigging agenda.

He added that the NDC would not allow that to happen and promised to fight for, and defend their rights as Ghanaians till their last breath.

“One thing is obvious! All these are intimidations to put fears in Ghanaians to pave the way for the EC boss to carry on with her rigging agenda, but it’s a lie! We are prepared to fight for, and defend our rights as Ghanaians till our last breath, no amount of intimidation will quench the perpetual fire of freedom fighting and defence”, he emphasized.

He stated that “In any case, all these intimidations seem to suggest that the Nana Addo-government is nurturing Public Silence and this MUST STOP! Citizens’ rights are protected under the Constitution and are sacred”.

Mr. Thomas Yankey, therefore, seized the opportunity to bash the National Peace Council for failing to exercise their duty by calling the Electoral Commission to order.

“To the Peace Council, it is unfortunate that a supposedly reputable institution like this is allowing itself to be manipulated and misled by the whims and caprices of a few political actors who are in (probably temporary) leadership, thereby rendering the Council insignificant. This is exemplified by the biased behaviour some of your top leaders have exhibited since the assumption of office of the current government”, he fumed.

“It is advisable that the Council defines itself clearly, knows and also let Ghanaians know what it stands for – whether it is a subsidiary arm of the NPP government or it serves the interest of the country in which sense it should be neutral in all issues affecting the nation. The Council should demonstrate without any possibility of ambiguity that it really, is a neutral and Peace-seeking Organization”, he added.

He reiterated, “That is the only way by which it will be accorded the respect it deserves that will enable it to play a meaningful role in the current issue involving the obsession of the EC boss with accomplishing the NPP’s rigging agenda and the opposition’s determination to resist that illegality at ‘any cost’.”