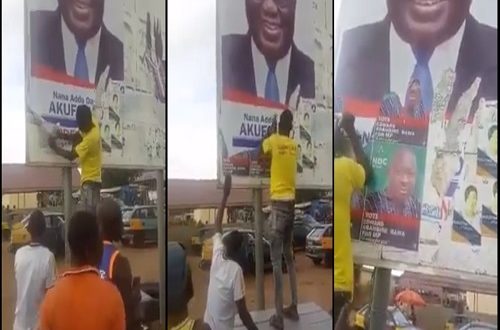 A viral video which has been spotted by our outfit captures the moment of some youth believed to be in the Upper East Region of Ghana were spotted removing the campaign flyer of President Akufo Akufo-Addo.

From what we gathered, the youth were actually removing the flyer of the president  to make Edward Abambire Bawa’s flyer more visible all because they alleged that he was the first to have his flyer on the said billboard. Edward Abambire Bawa happens to be a Ghanaian politician and member of the Seventh Parliament of the Fourth Republic of Ghana representing the Bongo Constituency in the Upper East Region on the ticket of the National Democratic Congress.

The video which has gone viral has also caused some mixed reactions between the fans to the 2 political parties. Some were actually of the view that they had no right to do that and that it was totally illegal and should be arrested for their actions whilst others were of the view that the whole campaign picture should have been pulled down.