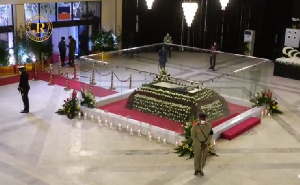 The mortal remains of former President Jerry John Rawlings is lying in state at the Accra International Conference Centre (AICC).

The body the late former President, who rose to the rank of Flight Lieutenant and a pilot in the Ghana Air Force, was dressed in Ghana Air Force ceremonial uniform (light blue) with his badges and medals pinned to his breathless chest.

The coffee-brown coffin, which contains the remains of the former President, is placed on a catafalque, surrounded by white flowers, propped on a red carpet with a glass screen to aid public viewing.

A source at the Ministry of Information told the Ghana News Agency that as a former Commander-In-Chief of the Ghana Armed Forces, his body will be guarded by four catafalque guards, which consist of colonels.

The Ghana Prison Services and the Ghana National Fire Service provided the background music for the filing past.

Seated on the right side of the foyer were Mrs Nana Konadu Agyeman-Rawlings, his widow and childhood sweetheart, their children, Colonel Joshua Agbotui (retired), the Head of the late former President’s family and other family members.

Hundreds of mourners clad in black and wearing facemasks, due to the coronavirus pandemic, filed past the remains of the former President to pay their last respect to him.
Some the mourners were in attires embossed with his portraits.

The building of the AICC had two giant portraits of the late former President on it.

The national flags within the premises of the AICC were all flying at half-mast.

The four-day state funeral, which began on Sunday, January 24, would have the main funeral event taking place at the Black Star Square in Accra on Wednesday, January 27.