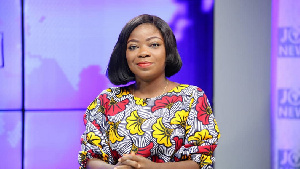 Broadcast Journalist Afia Pokua popularly known as Vim Lady stationed with Despite Media Group has said very soon, the opposition National Democratic Congress (NDC) may be launching Ashawos for Mahama as the 2020 campaign heats up.

Speaking on Okay FM, she said because NDC has not learnt any lessons, they will soon be launching “Ashawos for Mahama, Ladies for Mahama”.

According to her, the NPP must learn lessons from how then-incumbent John Mahama run his campaign and repeat the same in 2020.

Afia Pokua Vim Lady has since come under attack following her Ashawo comment. NDC activists on social media have opened fire on her with all manner of unprintable insults.

Her comments come after the former President John Dramani Mahama accepted an apology from the management of the Multimedia Group (former employers of Afia Pokua), operators of Asempa FM after one of their on-air staff “used words that were unpleasant” on his person in a radio broadcast.

Unrepentantly, the journalist who works with Multimedia (Asempa FM) used unprintable words on former president John Mahama after he led a section of his security detail to clear overgrown weeds in the middle belt of the ‘Mahama’ Road in front of the new Military Cemetery in Accra, over the weekend.

The overgrown weeds obstruct the view of motorists, especially towards the roundabout which motivated Mahama and his team to clear the area.