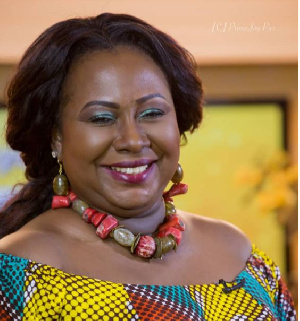 Speaking in an interview on Joy FM’s ‘Drive Time’ with Kwabena Anokye Adisi, the host of ‘StandPoint’ revealed that she ‘never dated’ the president adding that those speculations were plotted to tarnish her reputation.

Now Oheneyere Gifty Anti, she is married to Nana Ansah Kwao, Chief of Akwamu Adumasa. The gender advocate is a role model to young women and continues to impact society by discussing issues affecting women through her show, The StandPoint.

Read the full story originally published on November 21, 2013, on Ghanaweb

Renowned news anchor and television personality, Gifty Anti, has broken her silence after years of speculations that she dated former President John Agyekum Kufuor while he was in office.

In a bare-it-all interview on Personality Profile on Drive Time on Joy FM with Kwabena Anokye Adisi (Bola Ray) Thursday, Gifty said the rumours were wicked lies designed to tarnish her image and of the sitting president at the time.

She stressed that even though she was close to the former president, who ruled the country from 2001 to 2008, they “never” dated.

The StandPoint host said that contrary to the wild rumours that she had a frosty relationship with Mr. Kufuor’s wife, Theresa Kufuor, “she is like a mother [to me]”.

The former president’s wife, she noted, even paid her a surprise visit while she was celebrating her 40th birthday with some orphans from the Village of Hope, at the Afrikiko Gardens in 2010.

“She cut the cake with the children and they were so excited. That is how much that woman has shown me love,” the television personality recounted.

Gifty Anti also debunked rumours that she has a child with the former president.