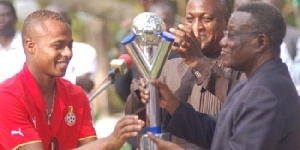 Tuesday, July 24 2012, was the saddest day in the political and football history of Ghana. President John Evans Atta Mills died at 68.

Goal.com Ghana extends our deepest condolences to his family and the nation as a whole. In remembrance of the ex-president, Goal.com looks at the various contributions the fine gentleman made to Ghanaian football and the various strides the national teams made under his tenure as president.

The late president Mills, who celebrated his birthday last Saturday, was a hockey player in his hey days, but joined in football administration as a former chairman of the Black Stars Management Committee and also a board chairman of Ghana Premier League giants Accra Hearts of Oak.

Prior to his demise, the political figure, whose speech epitomized peace hence the nick-name “King of Peace” – oversaw a lot of monumental occasions in Ghanaian football.

During his tenure, the Black Stars were present in three major tournaments – the 2010 and 2012 editions of the Africa Cup of Nations in Angola and Gabon and Equatorial Guinea respectively, as well as the 2010 World Cup in South Africa.

The four-time African champions managed to get to the latter stages of both Afcon editions gaining a spot in the final in 2010 before managing a semi-final place in 2012. The crown moment for the national team will be a quarter-final appearance in the 2010 global showpiece in the Rainbow Nation where only a missed spot kick stood between them and a record breaking semi-final appearance.

That missed penalty in addition to another wasted one in the last eight round of the continental flagship came to light as the late president jokingly referred to their spot kick misfortunes in his fourth State of the Nation address saying, “I was going to suggest that we need to teach them how to take penalties and somebody in this august House and an expert in penalty taking is Hon E.T Mensah.”

However, the Black Queens were not so prosperous in three years under Professor Mills failing to qualify for the Women’s World Cup in 2010, and their inability to make any meaningful impact in the 2010 Women’s African Cup. Our women crashed out in the group stages after two games, despite winning their third game as consolation. The team, however, has shown signs of improvement as younger players are being bedded in.

Conversely, the local Black Stars managed a second place finish in the inaugural African Nations Championship in 2009. They also managed to qualify for the second edition in 2012 but did not reach the dizzy heights of the 2009 campaign failing to get past the group stages.

The same cannot be said for the men’s Olympic team – the Black Meteors who failed in their quest to qualify for the Olympic Games in London 2012. Their female counterparts were also booted out, but both managed podium finishes in the All Africa Games held in 2011 with the men’s team winning gold and the women’s side silver.

Under-20 World Cup 2009: The Black Satellites ruled the world

On a positive note, the Black Satellites made huge strides when they became the first African side to win the World Youth Championship in 2009, a year which had seen them conquer West Africa and subsequently Africa in the WAFU and African Youth Championships. Striker Dominic Adiyiah was also named Top Scorer and Best Player of the tournament staged in Egypt.

However, the team failed to qualify for the 2011 edition after a poor performance in the Africa Youth Championships. The female side also made their debut in the FIFA Women’s Under-20 World Cup in 2010, but has qualified for this year’s edition scheduled for August. They lost one, won one and drew one in their competition debut though it was not enough to qualify them to the next round.

Sadly, the male U17 side the Black Starlets have had a torrid time over the last few years and have even failed to make it to the continental tournament having been knocked out by Gambia in the qualifiers for the 2009 edition and Senegal in the 2011 qualifiers. Their female counterparts have been more successful having appeared at their second consecutive U17 World Cup in 2010 and are poised to become one of the teams who have been present in all editions since inception when the 2012 edition kicks off in September.

These among others are how Ghanaian football lovers will remember their late president as the nation grieves over his sudden death.

This article by goal.com was originally published on July 25, 2012

Previous Fatawu Issahaku speaks after his penalty miss against Sevilla
Next Over 1,000 Burkinabe nationals flee to Ghana