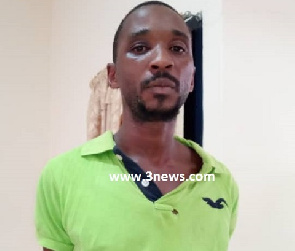 Share
The suspected Nigerian kidnapper, Sam Udoetuk Wills, currently under investigation for allegedly kidnapping three girls in the Western Region Monday morning told the Takoradi District Court that an officers of the Criminal Investigations Department (CID) with support from his two other friends Kwesi and John helped him to escape from police custody on the December 30th, 2018.
It will be recalled that Suspect Wills escaped from lawful custody at the Takoradi Central Police Command on December 30, 2018 after he was arrested for allegedly kidnapping some girls within the Sekondi-Takoradi Metropolis.
Suspect told however told the court he will be able to identify the CID’s who aided his escape if he is presented in a parade.
The Presiding Judge, Michael Kudjo Ampadu did not object to the prosecutor’s argument that it will be difficult to identify the said CID officer, but rather adjourned the case to 18th February 2019 to allow suspect Wills to bring his witness, Kwesi who is currently at large.
Apart from being investigated for Suspect kidnapping three girls, suspect Wills is also facing three counts of charges including escape from lawful custody, destroying public property and resisting rearrest.
Source: thepressradio.com/Ghana/ Shella Morcher
takoradi kidnapper 2019-02-11
admin
Share