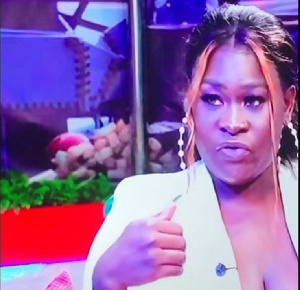 The Ghanaian songstress rendered a personal apology to Freda after she appeared on UTV’s ‘United Showbiz’ program hosted by Nana Ama McBrown which was monitored by Zionfelix.net.

Sista Afia said no matter what happened between them she loves Freda. She touted her prowess as a very good artiste.

The ‘Weather’ singer stated that she doesn’t want to go back and forth again with Freda Rhymz.

After disclosing the deep extent of how sorry she was, Sista Afia seemed ready to forgive Freda if she also apologizes to her at her own time.

Regretting her actions, Sista Afia stated that what happened was bad and she doesn’t want to see herself being angry on TV.

She reiterated that, she might not understand Freda’s beef, she still loves her as a sister.

Freda Rhymz, on the other hand, said she has accepted Sista Afia’s apology and justified that she didn’t attack her, but she [Sista Afia] was the one who attacked her first.