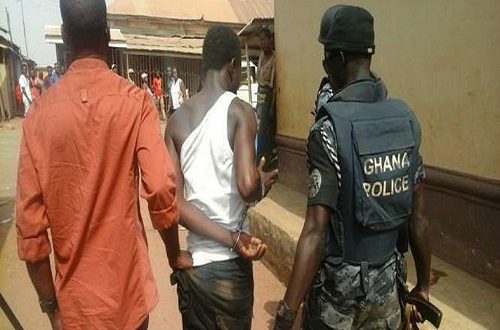 A self-styled policeman and two others have been hauled before a court over their alleged involvement in a GHc147,000 recruitment scam.

26-year-old Albert Bruce who parades himself as a senior police officer with the connivance of two others succeeded in duping about 51 persons under the guise of getting them gainfully employed in various government agencies.

The prime suspect who claims to be properly connected to persons in power, is reported to have taken various sums of money from his victims with the support of one Mark Doughan, a 32 year old driver who resides at Edukrom.

The third suspect identified only as Sadik is on the run.

Presenting the facts of the case at the Cape Coast Circuit Court, Sergeant Yakubu Iddrisu revealed that Bruce who claimed to be a senior police officer, met Doughan at Elmina and during a lengthy conversation, told his accomplice he could help people secure jobs at different public sectors at a fee.

Bruce was said to have told Doughan that his friend by name Sadik whom he claimed was also a senior Policeman, will facilitate the process.

Convinced, Doughan, contacted one Naana Ibrahim, a witness in the case to help him secure jobs for people in the vicinity with fees ranging between GH¢500.00 and GH¢7,000.00, which she agreed.

Naana Ibrahim later, handed over an amount of GH¢147,000.00 she had collected from 51 victims awaiting recruitment, to Doughan.

Sometime in July 2020, Doughan lodged a complaint against Bruce when the jobs were not forth coming and Bruce was arrested and confessed transferring some monies to Sadik.

He also admitted that he had earlier sent some fake letters to the victims to report at various public offices under the pretext of recruitment.

Sergeant Iddrisu said Bruce and Doughan have so far refunded an amount of GH¢31,000.00 to the police, which had been shared among some victims.

The suspect pleaded guilty to defrauding by false pretenses and the Court presided over by Mrs. Dorinda Smith Arthur deferred sentence till Tuesday, March 16, 2021.

Previous HOT VIDEO: Angry Kennedy Agyapong Slaps Assin fraudsters for defrauding a Canadian of Ghc600,000
Next I can sit by a gutter or hang on a tree like a monkey and interview people – Delay jabs Adu Safowaa