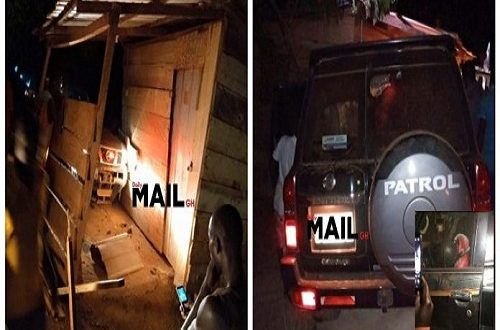 Police hunts for killers of DCE driver, two others

A special team from the Ashanti Regional Police Command is set to be deployed to the Amansie South District town of Dadease after at least three persons were killed in a gun attack on Monday night.

The victims include a man who was later identified as 40-year-old Samuel Osei, driver of the District Chief Executive of the area, William Asante Bediako, who was not part of the team when the incident happened.

The victim was reportedly returning from a Covid-19 sensitization exercise in adjoining communities ahead of market day at Manso/Datano on Tuesday when the incident happened.

Police were called to the scene and discovered the three persons lying lifeless in a pool of blood at separate locations.

They were declared dead at the scene after they sustained multiple gunshot wounds. The robbers had fled the scene when the police arrived.

Their bodies had been deposited at the St. Martin’s Hospital morgue at Manso/Agroyesum pending further investigations.

Police later confirmed that a fourth person is in critical condition at the same hospital after being hit by multiple bullets.

The Nissan Patrol vehicle with registration number GC 2085-18 has since been towed from the scene. Police also discovered two spent and six live AK 47 rifle ammunition at the scene.

The DCE, who doubles as chairman of the District Security Council, was not reachable for comments at the time of filing this report.

Even before Monday night’s attack, a similar incident had occurred at Manso/Asuadei also in the Amansie South District at about 2 pm on Friday, May 15.

According to a police report, sighted by Dailymailgh, six armed men attacked occupants of a Toyota Highlander with registration number AS 4090- 20.

A police officer who appeared at the scene while escorting a bullion van attempted to fire at the gun-wielding men but his AK 47 rifle misfired on three occasions.

The robbers fled the scene upon sensing danger.

The bullion van driver who sustained gunshot wounds was later treated and discharged by medics at the St. Martin’s Hospital at Manso/Agroyesum.