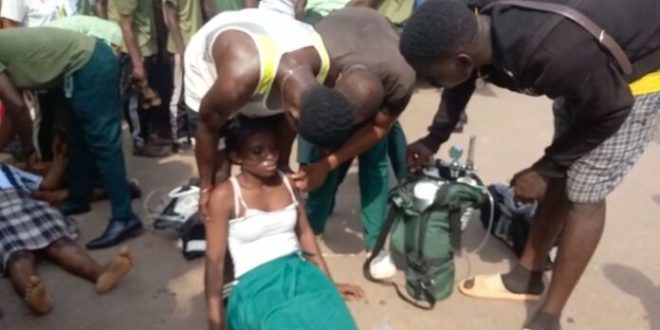 A demonstration by students of the Islamic Senior High School at Bantama in the Kumasi Metropolis has turned bloody, after law enforcement clashed with the marauding teens.

Several students who were manhandled by police re-enforcement from the Formed Police Unit (FPU) have been rushed to the Komfo Anokye Teaching Hospital and the Suntreso Government Hospital for medical attention.

About fifteen ambulances have been deployed by the National Ambulance Service to rescue the teens who have been suffocated in the stampede.

The students on Monday morning blocked the main road in front of the school to draw the attention of authorities to the need for road markings and speed rumps to curtail the rate at which speeding vehicles knock down unsuspecting students and staff of the school on a daily basis.

Today’s demonstration was in response to an accident last Friday in which one of the teachers of the school was knocked down by a speeding vehicle.

Riot police who were deployed to calm the tension employed pepper sprays, tear gas and what some onlookers suspect to be live bullets to push back the agitated students who threw stones at the police in retaliation.

Some journalists of Kumasi-based Angel FM who went to the scene to report the incident have been arrested and detained by the police for filming the incident.

As at the time of filing this story, the Deputy News Editor of Angel FM, Edward Amagyei Naaso, alongside three others from the same media house were in detention at the Suame Divisional Police Command, with their mobile phones seized.

Unverifiable reports from the Suntreso Government Hospital indicate that one of the students who is asthmatic has passed on.

Mynewsgh.com is working around the clock for all the details.