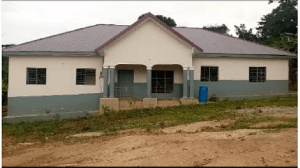 Over 700 CHPS Compounds in E/R not functioning – Health Directorate

The Eastern Regional Deputy Health Director, Dr. John Ekow Otoo, has revealed that most CHPS Compounds in the region do not meet the standard by which a health facility can be considered a CHPS Compound.

According to him, out of the over 800 CHPS zones in the Eastern Region, less than 80 of them can be considered functional CHPS Compounds.

Dr. John Ekow Otoo explained that a CHIP Compound needs to meet certain standards, such as having enough infrastructure to accommodate the health personnel or the staff, before it can be considered a CHIP Compound.

He added that a functional CHIPS Compound should have staff who are well trained to play their roles independently in terms of providing health services to patients who visit their facility, but that is not the situation in the region.

Dr. John Ekow Otoo revealed this in an interview during the celebration of World Population Day in Koforidua under the theme ” A World of 8 Billion Towards a Resilient Future For All: Harnessing Opportunities and Ensuring Right and Choices for All.”

The theme for this year, therefore, focuses on prioritizing rights and choices for all because sexual reproduction health and right is fundamental to Sustainable development.

Meanwhile, Juliana Abbeyquaye, the Acting Eastern Regional Director Department of Gender, said that women’s rights are still being abused since women are still being forced to marry or forced to go into prostitution because society now believes that the problems already exist with us, so it is normal for a teenage girl to get pregnant.

She also said the number of women who are dying in relation to pregnancy should be a wake-up call to the country because it poses a serious threat to the development and sustainability of women and their rights.