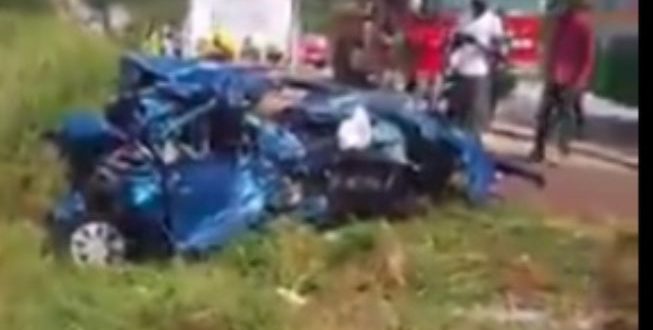 One dead in accident at Kwahu Akwaboa junction

The accident, which occurred on Thursday, 24 March 2022, involved 3 vehicles; an STC bus, a trailer, and a Toyota Vitz.

According to eyewitnesses, the Driver of the STC, heading towards Kumasi from Accra, attempted to overtake the Trailer which was stuck on a hill, due to a fault.

The driver of the Toyota Vitz, which was heading towards Accra from Kumasi, in a bid to swerve the STC, while the latter was trying to overtake the Trailer, got stuck in the middle of the 2 vehicles.

The Toyota Vitz was completely mangled, while the driver died on the spot.

His head was crushed beyond recognition.

The driver of the STC and some passengers who were seated close to the driver got injured and were rushed to the Nkawkaw Government hospital.