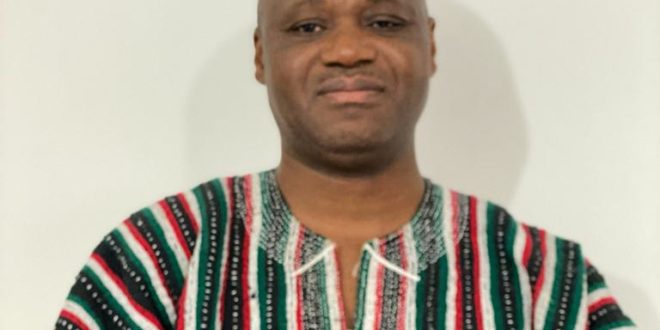 NDC UK/Ireland Chairman, Alhaji Alhassan Mbalba enumerates why he should be retained

In an interview on NFM radio on Thursday 10th November, Chairman Mbalba articulated on the need for him to be retained in the upcoming NDC UK/Ireland chapter elections. The host, Mansa Musa, did a fantastic job by asking the questions on the minds of most delegates in the run up to the chapter elections in December.

The first on the list of questions quizzed during the interview was on probity and accountability. Chairman Mbalba emphasised that accountability has always been a virtue he embraced wholeheartedly even before taking up any leadership role in the NDC. Alhaji Alhassan Mbalba further expatiated on the level of transparency he has instituted under his leadership on the issue of Finance within the rank and file of the chapter. For the first time in the history of the chapter, his administration appointed an internal auditor as stipulated in the NDC’s Constitution to independently audit chapter’s accounts  and his findings shall be presented to appropriate fora to settle any iota of doubt or acrimony on the financial health status of the chapter.

This according to chairman Mbalba were some of the policies he rolled out to ensure the membership were confident on what monies collected to the chapter.

Mansa Musa, probed further on why then his position is being contested by many this year in the upcoming chapter elections if all these measures were put in place and made known to all his chapter members. Chairman Mbalba opined that due to his good works and achievements, the chapter has now become so attractive that everyone feels its an easy office to run.

He welcomed all those contesting his position on board as it was good for the democratic dispensation of the NDC but hastened to add that what an old man sees when sitting down, a young man cannot see standing on the tallest iroko tree.

Chairman Mbalba went on to say that he has expanded the branches within the UK since he took over and this has transformed into an accelerated increment in terms of recruitment drive hence could confidently say that should the NPP decides to roll out ROPA today, the NDC will be in a better position to match them boot for boot.

Indeed, uneasy lies the head that wears the crown and when one takes up a leadership position, he becomes a public figure hence subject to public ridicule. Chairman Mbalba cited several occasions when instead of his detractors working with him chose to work against him especially if the collective decisions in a meeting were not in support of their whim and caprice. According to Chairman Mbalba, this anti – party behaviour could have easily divided the chapter if not for his years of experience in party politics and leadership qualities.

Alhassan Mbalba admonished his sympathisers and supporters not to be perturbed and swayed  by all those blowing hot air, dragging his hard earned reputation into disrepute and very often attacking his persona. He embraces all that is being said as he appreciates, they are inevitable casualties that comes with the job as chairman of the NDC UK/Ireland chapter.

Chairman Mbalba further intimated that whiles most of his contenders were actively campaigning and often maligning him, he still had an office to run as chapter chairman and an election to win hence in the borrowed words of incoming president John Dramani Mahama, Chairman stated that he is now suffering from ‘leadership syndrome’ but will soon hit the grounds with his campaign in the coming weeks.  In summing up reasons why he should be retained, chairman stated that you don’t change an experienced driver that is already chauffeuring his people to the promise land for an inexperienced one on the basis of trial and error.

The chapter has achieved a lot during his tenure but there are still more stones unturned hence wouldn’t serve the interest of the party to change his leadership now especially going into 2024. We need people with concrete track records that will walk the talk and foster unity within the chapter but not create apathy and open cracks across the various branches in the chapter. Chairman Mbalba asked the delegates to vote based on experience, leadership and accountability and that is what he basically brings to the table having served the good people of NDC UK/Ireland chapter diligently.