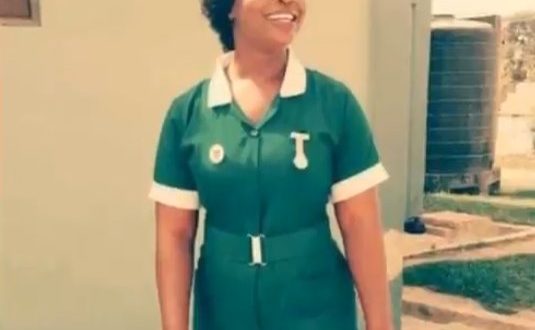 Kwadwo Arhin is the widower of the late Ruth Eshun, the nurse who is believed to have been raped and murdered at Ayuom in the Ashanti region.

Mr Arhin who spoke about his wife’s death for the first in an interview with Citi News said Ruth told him earlier on Monday, February 3 that she was going to withdraw some money in Kumasi.

He, however, stated getting worried when she didn’t return home at her usual time of 5pm. When he had still not heard from her by 9pm, he set out to look for his wife.

“At 9 o’clock, I had to go to the police and make a report of a missing person…the whole night, I moved from police station to hospital emergency centres all over Kumasi.”

Mr Arhin says whilst he was out searching for his wife, he received a call from his nephew that Ruth’s Voter’s ID card had been found in a bush close to their house.

This was followed by another call for him to return home.

“After that call, I received another call asking me to quickly come back home. So, I got really worried and I sensed danger. Then after a few minutes with somebody crying on the phone: ‘someone has killed Ruth.’ That is when I got to know my wife had been murdered,” a heartbroken Kwadwo Arhin narrated.

He says Ruth was not only a good wife and mother but also very spiritual. She was liked by many in their community that he doesn’t think she had any enemies.

“She is affable. She smiles all the time, even to strangers. She likes almost everybody that comes to her. She is very charitable. Whatever she has, once she sees you are in need, my wife will make sure she does everything in her means to help.”

Though he commended the police for how they have handled the case so far, Mr Arhin thinks they can do more to resolve the issue faster.

“I want very swift investigations to be done…I still see the investigation to be slow so I wish they expedite action so the perpetrators can be brought to book.”

Until her death, Ruth Eshun was a community health nurse stationed at the Sewua Health Centre.

The two who have three children together were meant to mark their 11th wedding anniversary in March.

In a related development, reports indicate that the scene of the crime where Mrs. Eshun’s body was found has been burned by arsonists.

Police, however, have noted that the actions will come to nought and would not affect their investigations since all evidence have already been gathered from the scene.