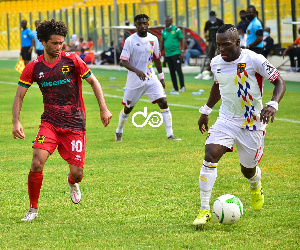 The Super Clash between Asante Kotoko and Hearts of Oak ended 0-0 after a well-fought battle between the two teams.

Kotoko got an opportunity to score the opener in the fourth minute after Kwame Opoku was brought down by Nuru Sulley.

Unfortunately, Richard Attah had other ideas, saving from the spot. Two minutes later, Hearts of Oak created a huge opportunity.

Obeng Junior played Patrick Razak through but his effort came off the woodwork.

Hearts dominated in the first half but failed to score the opener.

In the second half, Kotoko grew in confidence and created some opportunities.

But, Hearts of Oak had a big chance to get the opener. Mensah was brought down by Abalora in the box and a penalty was given. Unfortunately, Mensah saw his spot-kick saved by the goalkeeper.

The biggest chance for Kotoko fell to Kwame Opoku late on. He beat his marker for strength and blasted his effort into the post.

The two sides now have 24 points so far.