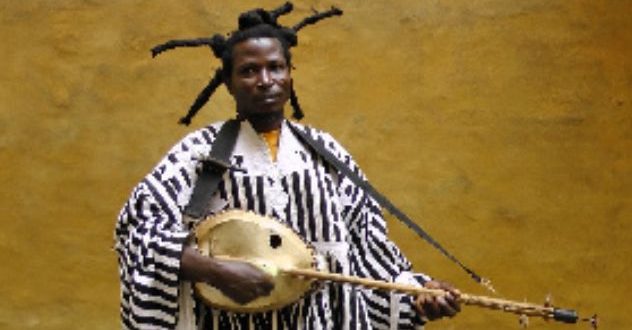 Share
Ghanaian traditional musician King Ayisoba born Albert Poozore was made to walk by a musical instrument known in the local parlance as ‘Kologo’ after three years of crawling, MyNewsGH.com has learnt.

This event in the life of the now-international act was made known during an interview he granted on Kantanka TV during the week monitored by MyNewsGh.com

King Ayisoba narrating his story revealed that, he could not walk three years after he was born.

“It was a stranger from Burkina who once come to our village and told my father to give me a musical instrument because that was the only thing which would make me walk”, King Ayisoba recounted

According to King Ayisoba,the stranger who wondered why he could not walk also realized he was a strong boy who has the capacity to walk so he recommended that the instrument be made for him and that alone will do the miracle.

He said to my siblings, “Why is this boy not able to walk, he needs this musical instrument to be able to walk. So he asked for my father and prophesied that, this boy is a spirit. He wants to play this instrument and he will become well known all over the world”.

The father of King Ayisoba wanting to know how authentic the prophecy was also consulted an oracle and was confirmed to him exactly what the stranger had said.

“My father went to an oracle and was told the same prophesy the man from Burkina had told him”.

It was then that he made the musical instrument for his son King Ayisoba and just a few months he stood up and walked.

According to King Ayisoba, he was able to professionally play the instrument his father made for him without any assistance.

“After he made the instrument for me, I was filled with joy in my heart and started playing without anyone guiding me on how to play it”.