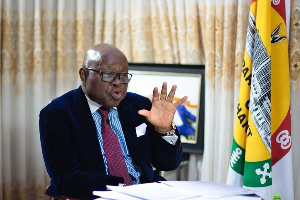 The Speaker of Ghana’s Parliament, Professor Mike Oquaye, has urged the World Bank and the developed world to accept the fact that most African nations abhor homosexuality.

According to Prof. Oquaye who doubles as a pastor, the practice of tying aids to the recognition of gay rights and marriages in Africa is unhealthy.

Speaking during a courtesy call by the country director for the World Bank Pierre Frank Laporte, Prof. Oquaye asked the identity of the African to be respected.

“The World Bank should dissociate itself from some of this modern reinterpretation of human rights and with special reference to the African’s own conceptualization, for example, gay rights. If we don’t like it, respect our view and don’t link it to aids, assistance, economic development because they have nothing to do with that.

“We are not for example in Ghana castrating people because they are gays and we are not engaged in any anti-human rights issue…It is time we look at this new interpretation of human rights which is gaining economic underpinnings in global relationships.”

The country director on his part assured the Speaker that the World Bank is clear in its mind the part it wants to play in eradicating extreme poverty and ensuring development through a partnership.

Meanwhile, the World Bank has cautioned Ghana against excessive borrowing as the country heads to the polls this year.

According to the Bretton Wood Institution, Ghana risk being classified as debt distressed if the development is not checked.

Government days ago raised 3 billion dollars on its latest roadshow. The country’s debt stock stands in excess of 200 billion dollars prompting calls for the Akufo-Addo led government to pull the brakes on the borrowing.

Speaking to the media after a courtesy call on the Speaker of Parliament, the Country Director for the World Bank in Ghana, Pierre Frank Laporte, however, argued the fiscal responsibility Act will serve as a check for borrowing.

Previous CPP reviews filing fees, flagbearer aspirants to pay GH¢170k
Next I will preserve strong relations between the State and Church – Akufo-Addo